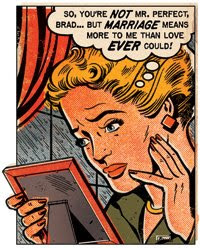 Tyler Cowen over at MR had this to say re: a new article on the Atlantic Monthly about settling down.

'So the "strong bidding women" can always cave and settle for a "lesser man" after an optimal amount of waiting, yet many don't. The distinction between period-by-period happiness and overall lifetime happiness also shapes the market. As smart single women mature, their lives get better and better. "Settling" becomes psychologically harder, even if it would make some of the "settlers" happy in the longer run. So settling doesn't happen; decisiveness become harder to conjure up at the same time that its long-run value is increasing, or in other words behavioral economics is very much at work here.'

As I just noted to a friend the other day immediate happiness doesn't always lead to happiness over time. Quite an article. It will, definitely, make some of my readers react a certain way...
Read it here.
graph per atlantic
Posted by B.R. at 5:33 PM

the latest slate gabfest addresses something so similar it must be part of the same study:
http://media.slate.com/podcast/SG08041101_Gabfest.mp3

Don't we all know people who settle at some point? I don't think settling is as bad a thing as some of us might think. It's sort of another alliance builder, ja? One's resources get stronger when joined with those of another person's.... Just an idea. But then again I have yet to settle on anything, really.

Becca makes this seem like a purely economic decision. Companies merge and consolidate. People on the other hand, I don't know if that's a good idea. People who leave emotion out always end up paying at some point. If settling provides some degree of comfort in the beginning, it can also lead to eventual resentment.

These are some strong statements that are made. I have to disagree with how the article mentions we should treat marriage more like a business. It leaves the emotional/love aspect of marriage completely out of the equation. Also, I do not believe that anyone should settle for less. If you think you deserve something/someone better, then go for it.