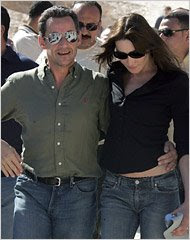 Chateaubriand once noted that “Taste is the good sense of genius.” France's president Sarkozy is being criticized for what many in France thinking is his apparent lack of interest in high culture.
The NY Times features a provoking spread on him today. It mentioned many things including the following, "the hyperactive Mr. Sarkozy reportedly text-messaged somebody or other while with the pope."
Hmm.
Here is a section from the article:
'Every French president since the liberation has cooked up some such pharaonic new museum or opera house or library or initiated some legacy-minded cultural program, until now. Mr. Sarkozy’s taste is said to be for Lionel Ritchie and Celine Dion. (Mitterrand mulled over Dostoyevsky; de Gaulle consumed Chateaubriand.) The current president’s fondness for showbiz pals, his marriage to the Italian model-turned-singer Carla Bruni and the appointment of a culture minister, Christine Albanel, who is intelligent but widely regarded as weak among Mr. Sarkozy’s ministers, have combined to produce something of a culture shock.'
Full feature here.
graph her ny times
Posted by B.R. at 5:40 AM

But why are they so hard on him? Just because he is the pres doesn't mean he is impervious to distractions. Er, have they 'read closely' Carla Bruni, I wonder...?

They should just let the guy be. I mean, how often does one get to be France's Pres. and get Carla Bruni....?

I'm still recovering from the text messaging and the Pope thing. Precious image, that one.....