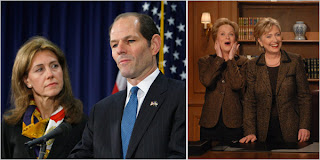 The recent Spitzer episode has raised a lot of questions many of which revolve around the presence of his wife, Silda. And while in the past few months most political commentators have done nothing but confirm to me that there is no agreement as to how big the gender bias in the ongoing race actually is, the recent Spitzer-centered events seem to have forced many to reevaluate the role of the spousal figure.
And this whole thing seems to have done something to the Clinton campaign. What other place to detect the shift than Saturday Night Live?
Read today's Times feature here.
Here is a bit:
"A contest between a woman and an African-American raises the inevitable question about whether it is harder to overcome racial bias than gender bias. Few claim to know the answer, and many argue it’s too hard to tease out the ways each plays a role. But some also argue that the media is not as quick to recognize misogyny as it is to recognize racism. “The media is on eggshells about race, but has blinders on about sex and gender stereotyping,”
Posted by B.R. at 9:48 AM

the gender bias could not be higher and as a man working in the beauty business, i should know!

From the very beginning I've felt that gender stereotypes were very much the issue....
-M

Just tell me why the hay the wives of these men have to stand by them when they apologize? What did they do, really? Obviously, it's an act of omission on their part.... Poor Silda looks mortified. And I would too. She better be getting a brand-new convertible.
Btw, do you know of this new Bravo series called The Real Housewives of New York.... OMG!