Tyler Cowan over at Marginal Revolution made me aware of this. 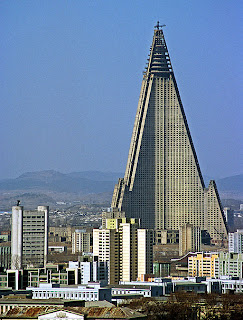 'A picture doesn't lie -- the one-hundred-and-five-story Ryugyong Hotel is hideous, dominating the Pyongyang skyline like some twisted North Korean version of Cinderella's castle. Not that you would be able to tell from the official government photos of the North Korean capital -- the hotel is such an eyesore, the Communist regime routinely covers it up, airbrushing it to make it look like it's open -- or Photoshopping or cropping it out of pictures completely.'

The structure makes me think of a couple of things.
What say ye?
Posted by B.R. at 9:01 AM

so, what gives birth architectural monstrosities then?

Oh, but how very wrong.... What might possess one to build such a Babel?

What sort of communist regime is this that doesn't have zoning laws? Exercising repression in all the wrong places, I guess.