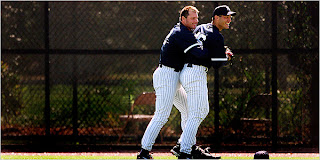 Ah, life was good back in the good ol' days of 2001.
The sun was shining, the game was strong, and Roger Clemens and Andy Pettitte had a ball paling around and hitting balls in practice.
This is how life was for these ballplayers back in 2001.
Fast forward to 2008 and these athletes are finding themselves dancing unwillingly before Congress.
The sun is not shining so much anymore and in a few days the two pals will be forced to discuss the now-ubiquitous topic of drugs and professional sports.
Today's NY Times article on the recent Roger Clemens performance-enhancing drugs talk, was one of the best I have read on the subject. It's penned by Mireya Navarro who asks the following question, "When do you take one for your buddy?"
This sports drama revolves around Roger Clemens, who was accused by his trainer Brian McNamee, of getting injected with performance-enhancing drugs from 1998 to 2001. The plot thickens when Clemens' pal, Yankees pitcher Andy Pettitte, gets involved. Pettitte has already admitted that McNamee injected him with human growth hormone. Now all three men have dates to testify on the matter before Congress.
The question most everyone is asking is: 'Just what will Andy Pettitte say?'
As the article observes:

'The pressure to be “one of the guys” is powerful, said Jackson Katz, an author on issues of masculinity. He said before acting men often weigh the risk of ostracism and loss of status. “Guys make calculations all the time that it’s not worth it,” he said. Men “have this notion that you try to prove yourself as a man.”
Women do seem to have a different notion of friendship. In the research literature, their bonds are described as “face to face,” meaning they share feelings more intensely. Male relationships are “side by side,” less touchy-feely and built around activities like sports or work.
But some experts noted that when it comes to loyalty, men and women are not as sharply divided as they once were. In institutions like the police and military, the same code of behavior rules over both sexes, as the torture scandal in Abu Ghraib prison showed.
And, of course, women are capable of betraying confidences, and men are capable of extremely generous and selfless acts. The former Dallas Cowboys star Everson Walls, for instance, donated a kidney last year to a former teammate, Ron Springs.
Peter M. Nardi, a professor of sociology at Pitzer College in Claremont, Calif., who has written about heterosexual and gay male friendships, said the nature of bonds could also vary depending on ethnicity, sexual orientation and social class. Gay men, for example, share issues of identity and disclose more to each other than heterosexual men do.'

This new situation in which Roger Clemens finds himself is yet another example of people learning how to navigate the uncertain waters of intimacy and professionalism. We'll see what kind of tune these chums will be dancing to this coming Wednesday. I am intrigued.
Read full article here.
Posted by B.R. at 3:04 PM

Ha. Good one, you! Winning sentence:
'The sun was shining, the game was strong, and Roger Clemens and Andy Pettitte had a ball palling around and hitting balls in practice.'
Waiting to see how Wednesday will turn out.

a test of friendship, indeed.
but doesn't every great friendship 'contain' a good number of tiffs.... so, if Pettitte does go against him they will reconcile eventually.
a reality tv show, perhaps? going once, going twice, sold! i can see VH1 proposing a pitch :)

a test of friendship. ha. good one, nicky. the reality tv idea does not seem too hard to believe.

When in doubt about definitions of homosociality, read this post. :)