Great Literature? Depends On Who Wrote It 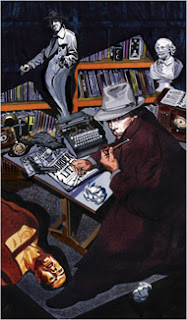 I read a most interesting article on the NY Times today about value judgments we make regarding literary creations and their assigned critical ranking within the 'canon' itself.
While reading this article I was reminded of a conversation I had with a nice man on a plane on the way to California. He asked me what I was reading. 'Foucault's History of Sexuality, Vol. II' I said. 'Ah. Hmm. If you were reading science fiction I would have had something to say. Unfortunately, I have not quite made it to volume 2 of the History of Sexuality, not that I've read the first volume or anything. Foucault. Yeah, he's no Stephen King, right? Tough to read?'
'He has his moments,' I say and we exchange little else on the way to San Francisco other than the one time he kindly asked me if I wanted his peanuts since he was allergic to them. The other tidbit I could have shared with him is that I don't really 'do' science fiction but that would have been rude and unkind as he intimated that it's what he really enjoys reading.
That we make judgments about who writes certain kinds of literature is nigh factual to me. That we also, occasionally, make certain judgments about who reads what kinds of literature seems to stand to reason too.

My favorite snippet from the article would have to be the following:

'... mysteries, thrillers, romances, horror stories — is a form of literary slumming. These kinds of books are easier to read, we tend to think, and so they must be easier to write, and to the degree that they’re entertaining, they can’t possibly be “serious.”

The distinction between highbrow and lowbrow — between genre writing and literary writing — is actually fairly recent. Dickens, as we’re always being reminded, wrote mysteries and horror stories, only no one thought to call them that. Jane Austen wrote chick lit. A whiff of shamefulness probably began attaching itself to certain kinds of fiction — and to mysteries and thrillers especially — at the end of the 19th century, with the rise of the “penny dreadful,” or cheaply printed serial. The market and public appetite for this stuff became even larger in the early years of the 20th century with the tremendous growth of pulp magazines, which specialized in the genres and eventually even added a new one: science fiction.'

When thinking of the literary greats some of us tend to think of such seemingly serious authors as Dickens and Dostoevsky forgetting that many of them also wrote other than stupendously critical pieces. At times they wrote to support their social habits and vices. Thankfully, other times they wrote for the sake of writing.

Definitely the best thing I read today. Thanks, Charles McGrath.
graph per ny times
Posted by B.R. at 10:36 PM

'... mysteries, thrillers, romances, horror stories — is a form of literary slumming.' this will be my gmail chat line today.

i had a similar conversation with other library employees who complained about dvd's and how they intimated they weren't a valid library material. that compelled me to ask if danielle steele novels are any more valid than dumb and dumber?

wasn't dickens paid by the word....

I wonder if your plane companion will ever stoop to read Foucault. Just because Michel has never been honored or respected the way many science fiction authors have been does not mean that he didn't have something important to say.

i agree with anonymous.
tolkien might 'rock' but so does michel.
i don't know what's funnier the anecdote, or the fact that you always sit next to chatterboxes on the plane.