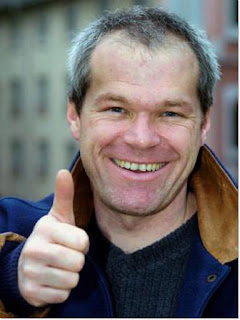 And yet studios keep hiring him to make even more flops? I couldn't help but think of Mel Brooks' The Producers.... What does Max tell Leo? 'You can make more money with a flop?'
Hm.
graph per box office junkie
Posted by B.R. at 3:43 PM

i think this picture of his is genius!

I actually think this is an excellent example of current 'art' forms.

i'd like to think i follow German filmmakers pretty consistently but somehow I've never heard of this Kerl....
i can see now why.
i'd imagine that many other directors make a number of flops as well, though maybe just not as 'consistently' as this one.

Ha-ha. Last time I checked, Turco, we were both Jason Statham fans. I had no idea we also shared a Forlani interest.
She was ok in Joe Black. Marcia Gay Harden was good in it, as was J. Tambour. In my mind, Martin Brest's Meet Joe Black is the best example of a US production that could be referred to as total Kunstwerk. I liked!