What Is the Scene? 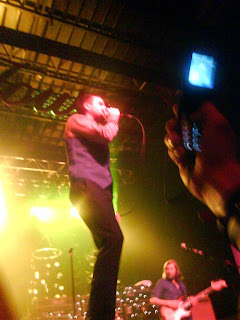 On New Year's Eve I asked my musician friend Liam, who plays with the West-based band Calico, to explain to me how he understands the term 'scene.' Liam is one of the regular Gesprächsparter who provides me with much helpful musical and cultural information. He often says things like, 'it's the scene, you know?' or 'it's in the scene,' 'I know her/him from the scene, and so forth.'

Other young professional friends of mine employ the same term when they discuss their respective job markets, their decisions regarding moving to certain urban areas, and so forth.

Many of them morph statements like, 'The scene is quite good there, so I'm considering the job.' 'Ah, yes, and I year the scene's something else there, so will have to check it out.' 'So, how's the scene there?'

Like other folk out there, I am of the general belief that where the artists gather comfortably, there I would want to be also.

The scene seems to reveal much about the urban setting itself.

Richard Florida has much work on the concept of the city and what urban development says about the quality of life. He has also written on the 'scene' and what the 'creative class' has in mind when talking about the scene. He is of the opinion that geographic place is of primary importance and that it is one of the factors that determines how happy a person can actually be. He ventures as much as to say that ultimately picking a scene is as important as picking a partner/spouse and career.

So, just why does the 'scene' matter? Because if one is especially in the creative business, one needs constant stimulation from other fellow creatives. A place that welcomes and supports creatives tends to be a more tolerant, boundary-shattering type of place, and most artists tend to flock to areas where they are promoted and seen as important commodities in the immediate culture.

It makes sense to me why my lawyer, medical doctor, engineer, musician friends first investigate the scene of a place before deciding to join said place. And while technology and WiFi enables us much by bringing it closer virtually, geographic proximity is of the utmost importance. There is no price for real artistic support engendered by the community in which one lives.

This is what my musician friend, Liam of Calico, observed re: the question of what the scene is.

'The scene as it exists everywhere i know of contains its own
fragments of sub-scenes, if you will. Within the music scene there's
the various genres and sub-genres. I've even heard us referred to as
a "third south" band more than once. Naturally that geographic label
means more than just our locale of practice space, many of our
residences and oft-played venues, but it seems that third south as a
whole has created its own identity in the last year.'
Posted by B.R. at 10:57 AM

extrinsic motivation is very important to people in the creative business. i also often ask scene-bound questions. of course.

third south is 300 south, which is three blocks south of the lds temple in salt lake city. the blocks between state and fourth east are also commonly referred to as broadway, although broadway technically extends a few more blocks west, as well. in the last year or so east broadway has come to mean the centre of art and fashion for salt lake city. the gallery strolls every month are basically centred around third south now, quickly replacing the revered pierpont monopoly (just off third south but farther west), and the new monthly fashion strolls take place in these couple blocks, as well. the hip coffee joint, indie record shop, local clothing boutiques, art galleries, etc. have really built the identity there, also. it's nice, but it can also be quite suffocating in its own way...

Thanks, Liam. Was going to ask you to address Becca's question.
I started picking up on the 'third south' bit before I left the city.
SLC has undergone a shift too, as an urban center. For example, like you noted, the 'revered pierpont' has lost some of its presence due to the popularity of the Broadway phenomenon. Again, indie movie theaters, 'hip coffee joint, indie record shop, local clothing boutiques, art galleries' et al., are bound to attrack much artistic attention.

Because even work productivity is inextricably linked to creative interactions. I know that's one of the things I investigate when thinking re: moving....

right. i have noticed that of which Liam talks about. Broadway is getting much, much visibility. i contribute it to the fact that many indie businesses are sort of gathered together in the same spot.

Did you take this Brandon Flowers pic with your phone when you last saw them?
I like the angle.
To me the 'scene' consists of old bookstores. 'There where they are, there I want to be also.' How's that?

not to accredit third south too much to one person, but kenny riches laid a lot of the recent groundwork for that area holding multiple leases on the street and partnering in various enterprises on that strip. the fact that he's moving to new york now will leave a gap in that fabric...

ed...
there's an antiquarian book shop (ken sander's) right off third south on second east and the oldest bookstore in slc off third south and main (sam weller's). both are anchors for the area...