Of Borges, Virtual Reality, and Web 2.0 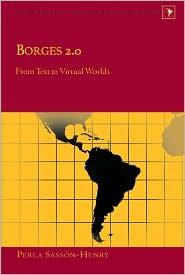 I am a fan of Borges.
So, when I found out about a new book on Borges, my curiosity took charge.
The new project is by Perla Sasson-Henry and it's called Borges 2.0: From Text to Virtual Worlds. Its premise is of much interest to me for it deals with the Web and a supposed 'pre-knowledge' Borges, the librarian, might have had about it.
As the review has it:

Yet a growing number of contemporary commentators — whether literature professors or cultural critics like Umberto Eco — have concluded that Borges uniquely, bizarrely, prefigured the World Wide Web. One recent book, “Borges 2.0: From Text to Virtual Worlds” by Perla Sassón-Henry, explores the connections between the decentralized Internet of YouTube, blogs and Wikipedia — the so-called Internet 2.0 — and Borges’s stories, which “make the reader an active participant.” Ms. Sassón-Henry, an associate professor in the language studies department of the United States Naval Academy, describes Borges as “from the Old World with a futuristic vision.” Another work, a collection of essays on the topic from Bucknell University Press, has the provocative title “Cy-Borges” and is expected to appear this year.

So, why read this book?
First and foremost, I would say, one needs to reads this because it asks intellectually stimulating questions about book and knowledge organization and how those who came during pre-Web 2.0 saw and quantified information. But the main reason would be, it asks some appealing and interesting questions about Borges' literary instinct about narratives and plot lines.

For did there, ever, live a better librarian than the incomparable Argentine?

for some uncanny reason, it makes full sense to me that Borges and Web 2.0 would be 'grouped' together. it certainly makes more sense than Al Gore taking the credit for having 'invented' the internet.:)

This book did indeed make an impact on me. Borges, the librarian and Web 2.0 seem to go together in my head as well.

Just because i couldn't conceive of anything even remotely similar to the internet just 12 years ago, does not mean that others couldn't be forward-thinking. I guess, that's why Borges is Borges and, well, Rebecca's Rebecca!
Web 2.0 has improved my life so much, though. So very much!! Yippy to the internet: the one true democratic medium.