Wikipedia defines a lurker as a "person who reads discussions on a message board, newsgroup, chatroom, file sharing or other interactive system, but rarely participates.

A 'lurker' is also an official member of the British punk band, The Lurkers who formed late in 1976. They played some of their first shows in the now-legendary Roxy Club in London. But the reasons why I thought I'd blog on the term 'lurker' is because Prettier Than Napoleon's blog informs me that this week is 'National Lurker Week.' Plus, I found the logo quite interesting. 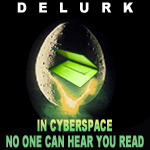 graphs per wikipedia and she likes purple
Posted by B.R. at 5:36 AM

In light of the National Delurking Week I'm breaking my pattern of silent reading of others and am commenting today. Are The Lurkers any good, btw?

Coining the term "lurker" is a pitiful attempt to up the social anxiety ante on blog comments, or whatever type of internet comments one is looking for. It reminds me of some sort of high school pathetic popular vs. unpopular bullying game: oh don't be a lurker, you dolt! Comment on something!

What is wrong with merely reading and privately enjoying something? Who really cares if there are thousands who never comment?

This might be my last comment, in protest of this term internet users are employing to define their readers.

Absolutely, 'Anonymous.' Just like a performer needs an audience as a way of rendering visible his/her ontology, a blogger needs his/her lurkers.
However, I don't find the term lurker too problematic. I tend to lurk a good deal as well and don't feel like I have to participate actively. I speak when I feel so inclined.

Right. I don't like the word 'lurker' any more than I like the word blog... They're not the most melodic words in the language but be that as it may, I do think, as Rich pointed out earlier, that lurkers are as valuable to virtual communication as active contributors. And like Rich, I'm also a lurker quite often. Silent participation is a praiseworthy 'activity' too. Thanks.

lurking is half the fun, yes?
isn't the whole 'gaze' thing fundamentally a lurking thing?
ok, you'll say 'no, not entirely...,' but i had to throw it out there.
how does gender theory deal with 'literary' lurking? is there such a thing?