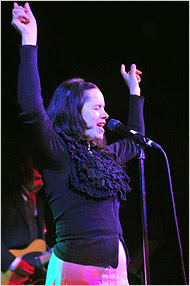 Many performers in this day and age run out of contracts and they choose not to sign with other labels for one reason alone: utter creative freedom. At least that is what they tend to say.
The question I have when reading about performers who have already enjoyed a successful career is the following: would they be embarking on the ars gratia artis ship if they did not already have a critically and commercially successful career?
The Times features Natalie Merchant this week. Merchant made a name for herself in the 90's and while I would choose to see her perform live in 2008, I think I'd make such a decision on account of her previous success and popularity.

Ms. Merchant, who sold millions of albums in the 1990s, has an adoring audience and no record label behind her. She’s not alone. As contracts end, more and more well-known musicians are trying to reinvent their careers for the era of mass downloading and plunging album sales. At the Hiro Ballroom, when a voice in the crowd asked when Ms. Merchant would release a new album, she said with a smile that she was awaiting “a new paradigm for the recording industry.”

Merchant and such performers as Radiohead may engage in marketing novelties more easily and comfortably than other unsigned artists because they are already sufficiently marked and recognized. This is primarily a question of economics. What do you think?
graph per ny times
Posted by B.R. at 11:06 PM

i immediately thought of what now many bloggers are calling the 'Radiohead Scenario.' sure, performers may decide to come up with different ways of pricing their final product but they would only manage to do post-success, I would imagine. unless, they truly create out of this ars gratia artis need you talk about.
i can tell you right now that as a rather unmaterialistic and generally minimalistic musician myself, I would not say 'no' to an Arista label....

I agree with Silke. Make a name first, be more unmaterialistic later. First one tries to survive.... But I think I would go watch Natalie Merchant if she were one of my local performers.