Uptight and Classy Is In, Way In 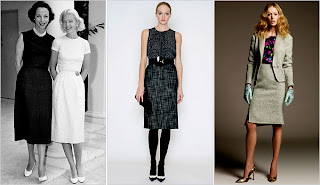 What could fashion be revealing about the psychology of our time? I looked at some samples from Prada, Marc Jacobs, and Louis Vuitton and I detected a fundamental similarity between them. They all seem interested in more contained presentations, straight lines, and calmer form.
As Sam Shahid, an art director, noted when asked about the current trends in fashion,
“Even in photography, everything we’re seeing has a classicism about it.... Things are timeless right now, or you want them to be.”

Michael Kors, a designer whose collection is also sporting more balanced and quieter choices, observes: “...That moment resonates with a lot of people and how they want to live. There is not a minidress to be found, not a platform shoe in sight. And ‘suit’ is not going to be a dirty word.”

'Designers seem intent on returning to old-fashioned civilities just the same. Some view the resurrection of a more formally controlled aesthetic as a rebuke to young Hollywood’s disheveled style. Thakoon Panichgul, who will show a collection of body-skimming dresses with subtle ’60s details, maintains that such looks are timely. “There is an energy about being proper,” he said. “It’s not about wholesomeness, it’s about respectability, about having manners again.”
That concept has an unexpected appeal to the young. “So many young women relish the idea of looking turned out,” Mr. Kors said. “It is the opposite of trying so hard to look undone” — an attitude that, as he argued, women in their 20s are beginning to find stale.'

"...it’s about respectability, about having manners again."

this is what i love about girls right now, and how i try to present myself at the moment. maybe it's because i'm older, but i really appreciate this way of thinking. perhaps it's a counteraction to the way so much of our society is falling apart. it's a way of rebuilding ourselves from a different angle by exploring some of the civility our grandparents appeared to have...

I also think classier lines are symptomatic of the mood of our time.
I agree with Liam. I also like girls who dress well and respectably. For some reason well-balanced lines are not only 'cute.' They evoke some kind of aesthetic towards which I also happen to be drawn.

i have always maintained that staying classy was in..... even though i do spike my hair occasionally.

i've heard before that US americans have been on a steady downslide in happiness since the 1950's. perhaps midcentury design was a simple factor in that happiness...