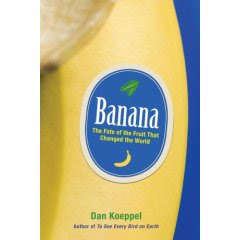 The following is from Tyler over at marginal revolution.

'You will never, ever find a seed in a supermarket banana. That is because the fruit is grown, basically, by cloning...Every banana we eat is a genetic twin of every other.

It turns out, by the way, that the world's supply of Cavendish bananas -- the ones we eat -- is endangered by disease (more here) and many experts believe the entire strain will vanish. Most other banana strains are much harder to cultivate and transport on a large scale, so enjoy your bananas while you can. The previous and supposedly tastier major strain of banana -- Gros Michel -- is already gone and had disappeared by the 1950s, again due to disease. Today, European opposition to GMO is one factor discouraging progress in developing a substitute and more robust banana crop.'

I know I would miss my daily banana. Breakfast would lose some of its relevance without it.
Dan Koeppel's Banana: The Fate of the Fruit That Changed the World is a new title that deals with the journey of this now-ubiquitous fruit. The book is not just about the journey and fate of the banana but also a socio-economic picture of modernity. As a review states:

'...but the biggest mystery about the banana today is whether it will survive. A seedless fruit with a unique reproductive system, every banana is a genetic duplicate of the next, and therefore susceptible to the same blights. Today’s yellow banana, the Cavendish, is increasingly threatened by such a blight—and there’s no cure in sight.

Banana combines a pop-science journey around the globe, a fascinating tale of an iconic American business enterprise, and a look into the alternately tragic and hilarious banana subculture (one does exist)—ultimately taking us to the high-tech labs where new bananas are literally being built in test tubes, in a race to save the world’s most beloved fruit.'
Read more of the book review here.
graph per amazon
Posted by B.R. at 12:06 PM

a grocery store without bananas is not a grocery store.....
like Koeppel says this is not just about bananas but rather about technological and economic choices. bananas are but a minor, representational form.

A good example of concatenation.

Yet another example where a banana represents a much larger text than its very self.