From Russia, with Love: The Catwalks of Moscow 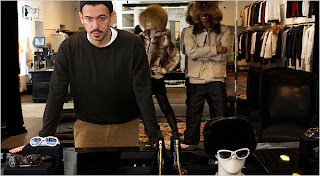 Via the NY Times
By Natasha Singer

Note: I just read the following from the New York Times. Interesting reading of the semiotics of fashion, I thought.


MOSCOW, Nov. 26 — Empowered by an oil boom that pushed the country’s trade surplus past $94 billion this year, Russia has been flexing its muscles abroad. At home, meanwhile, young and trendy Muscovites are in the throes of nostalgia for the staples of Soviet childhoods, relics of a time when the U.S.S.R. was at the height of superpower status.

That may explain why one of the most popular fashion designers this fall is Denis Simachev, who is selling overcoats fastened with hammer-and-sickle buttons, gold jewelry minted to look like Soviet kopecks and shirts festooned with the Soviet coat of arms, complete with embroidered ears of wheat.

“People in their 30s see these kinds of symbols as reminders of happy memories, like going to pioneer camp where they lived together, ate breakfast together and played sports,” said Mr. Simachev, 33, who wears his hair in a Samurai-style ponytail. He insists he is no Communist — for one thing, his overcoats sell for about $2,100 and his T-shirts for about $600. His boutique is sandwiched between Hermès and Burberry stores on a pedestrian lane, Stoleshnikov, that is one of the capital’s most expensive shopping streets.

Mr. Simachev first attracted notice with a collection of retro Olympic tracksuits emblazoned with C.C.C.P., the Cyrillic initials for the U.S.S.R., and T-shirts printed with the likeness of President Vladimir V. Putin, which served as a wink at the cult of personality forming around the leader.

By tapping into a generation that is experiencing an identity crisis, Mr. Simachev, who is also known here as a D. J., a Ducati motorcycle rider and a snowboarder, has quickly become the epitome of Russian cool for a subset of gilded Moscow youth. They throng the pub underneath his store for lunch and on weekend evenings when it transforms into a nightclub.

Victoria Tirovskaya, 24, says she wears the designer’s clothes because they are chic and a bit audacious. “I have a classic blouse and shorts from Simachev but I also have a U.S.S.R. sweatshirt,” Ms. Tirovskaya, an interior designer, said. “Before Simachev, nobody dared to use the symbol of our country as a fashion icon.”

The designer’s rise as the commissar of Soviet kitsch neatly dovetails with Russia’s current embrace of retrograde politics and resurgent nationalism. A billboard just off Red Square advertises the results of the parliamentary elections, scheduled for early December, as if they were a fait accompli: “Moscow votes for Putin!”

After more than a decade of Westernization, in which international brands have flooded the Russian market and the Russian elite have taken to wearing designers from Valentino to Louis Vuitton, a “Back to the U.S.S.R.” movement among consumers seems a logical step, some social observers here say.

“At first, the people of my generation wanted to try those things that our parents could not, but now that we have seen everywhere, we are coming back to our roots,” said Evelina Khromtchenko, the editor in chief of the Russian edition of L’Officiel, a French fashion magazine.

Mr. Simachev has developed a swaggering fashion lexicon typified in his men’s wear by fur hats, fur boots, jackets with muscular shoulders and slim-hipped, low-slung trousers. “We are from Russia, from the former Soviet Union,” he said. “It’s what I know about, it’s what inspires me, and now, after years of Russians trying to live a Western lifestyle and forget they are Russian, other people are getting it.”

Unlike the Americana of Ralph Lauren, with his easeful style informed by the Ivy League, Mr. Simachev’s evocation of motherland style often provocatively incorporates jingoistic elements. In the past four years, he has designed collections inspired by the war in Chechnya, the boycotted 1980 Moscow Olympics, the Soviet Navy and, this season, Moscow criminal gangs of the 1990s.

Critics have interpreted his collections as endorsements of, or protests against, past and current regimes. But Mr. Simachev described himself as apolitical. “I am a mirror for what is going on around me,” he said.

He added: “Nobody wants to go back to Communism. But it had certain attributes and symbols which for younger people are not associated with the regime, but with our own personal memories.”

Russians more steeped in Soviet history say they are appalled at the merchandising of the symbols of totalitarianism. “Personally, I would never wear something by Denis Simachev because, for me, those symbols mean Stalinist terror, Communism, a K.G.B. spy system and the cold war,” said Alexandre Vassiliev, a fashion historian who has published 14 books here. “I disapprove completely.”

The designer’s fans say his motives are purely commercial. “Why did Andy Warhol paint Mao Zedong or Lenin? Because they are easily recognizable symbols,” said Nicolas Iljine, who specializes in Russian-American cultural exchange for the Solomon R. Guggenheim Foundation. “This is all pop nostalgia in a light-handed way. It doesn’t have deeper meaning.”

Mr. Simachev’s fashions are reminiscent of the tongue-in-cheek use of Mao references by the Hong Kong retailer David Tang, who sold his versions of retro Communist kitsch in the late ’90s, just as China was embracing the global capitalist economy.

For now, the Simachev label appears to be attracting more attention than revenue. With Russians earning an average of about $550 a month, few can afford Mr. Simachev’s wares. The designer’s clothes sell at about 30 multibrand boutiques in Russia and about 15 stores abroad, said Anna Dyulgerova, the development director of the brand.

The investors behind the label are two Moscow businessmen, Vadim and Vyacheslav Aminov, who declined to reveal annual sales or the size of their share in the company. Vadim Aminov, 38, said the two hope to make Simachev the first Russian brand to win worldwide recognition. Mr. Simachev already shows his men’s wear collections on the runways of Milan. His Web site, www.denissimachev.ru, is in English.

Vyacheslav Aminov, 48, said the brand was famous enough that it attracted imitators. “When I was on the beach in Sardinia, I saw hawkers selling fake Simachev T-shirts,” he said. “I am sure that Simachev is the only Russian designer who has knockoffs.”
Posted by B.R. at 9:33 PM

I liked the last paragraph. I guess you are nobody till someone imitates you. Interesting piece.

I don't really feel like wearing any of these pieces, but then again, they don't speak to my ontology. The beauty of this 'text' however, is that those whose ontology may be analogized with the designer's own nature, and subsequently, choices, now have a textile context.