The Pursuing of Happiness

The substantive: 'pursuit' gets used with a lot of frequency in tandem with the other substantive: 'happiness.' To a linguist, 'pursuit' entails sort of a fait accompli and that doesn't quite make much sense to me.

I think a gerundial makes more sense here. 'Pursuing' happines. Or a gerundial noun: the 'pursuing' of happiness as it suggests on ongoing activity, that which informs quotidianity.

I revisited an existential discussion of happiness with a good friend of mine whom I met while at Ohio State. I thought a lot about my days at Ohio State this past long weekend as I was taking in some fresh air while snowboarding.

I met this particular friend on my first week at Ohio State. I was the youngest professor, by a good bundle of years, and I'd go to my lecture halls skipping through the fall-colored Buckeye campus and while listening to some indie rock. I was pursuing my happiness.

Once I'd enter the building, I'd look at myself on the reflection of my face on the iPhone, clean my glasses, apply some lipstick, and take a sip out of my venti Macchiato. As a matter of fact,  I rarely, if ever, went to my lectures without one. Routine mattered to me. It released my flow of thoughts, I supposed. And then I'd enter the realm of the Middle Ages or Gender Theory or Existential Cinema, whatever the lecture was that I was giving, and get lost in a sea of words that, for some reason, always came too easily and far too naturally to me.

After my lectures, I'd go to my big office, grab my uber-light Ventura bike where I would lean it against my book shelves, and go to Starbucks for a quick writing session away from the incessant knocking on my door. One day, while on the way to Starbucks, a guy said 'hi' to me at the light and asked me how I liked living at Olentangy Village. I must have given him one of my doubt-informed looks that said, "Hmm. How do you know where I live?!" because immediately he said, "oh, I live there too. I've seen you at the Cup o' Joe's across the street. You're always in a hurry, though. You move really fast. And you're really fast on that bike, too."

I remember thinking that the red light took much too long to turn green as a perfect stranger was sharing a bit too much and I had no idea who he was. "So", he continued, "what program are you in?" "What do you mean, 'program'? I asked. "You're a grad student here, right?" he carried on.
"What? No. I've got my PhD already. I haven't been a grad student in quite some time. I'm a prof who likes her bike a whole lot, you know? Anyway, yeah, nice meeting you."

And we became friends. He still is a good friend and after speaking to him this past weekend, I thought even more specifically about the pursuing of happiness.

We all have a limited amount of time on the planet. The pursuing of happiness has always been my driving force. Not the accumulation of accolades or man-made trophies.

When in my yoga classes now, I often think of those 4pm gym session while at Ohio State. The days when I'd hop on my Ventura bike, go to the gym, swim and think of my strategy to exit academia and start a life in the private sector.

And as I tell my many staff now, "if you want something for yourself, you have to take it. It will, most likely, not just be given to you. You need to take it." And I think it's the same advice I gave myself when I was thinking of moving to the Northwest, live in beautiful nature, and work in the private sector while still very much intertwined with the channels of academia.

I choose to be in movement. I choose the 'pursuing' instead. it's, after all, in my DNA. It always has been. And there cannot be much pursuing of happiness without being true to one's nature.

But instead of doing laps in a pool, like I used to do 3 years ago prior to my moving to the Northwest, I now choose to swim in the Pacific. Well, not 'now' now. Now, I snowboard. And in a few months, I'll be hitting the ocean again like last year. Because that's what I want to do. And I took it. 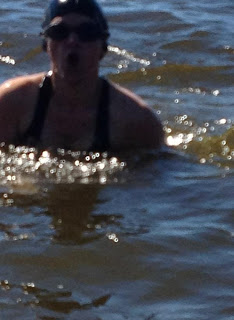 Take it back! Also, one never know how one will meet and bond with another. It's important to keep those opportunities open.

"Take it." Often so many of us expect others and other circumstances to dictate our happiness. Oftentimes it's as simple as choosing to "take it." I dig it.