There's a folder in one of the iPhoto libraries that reads 'Bri Thinking Photos.' I opened to look at it today and I saw one that matched the diurnal mood. This one. 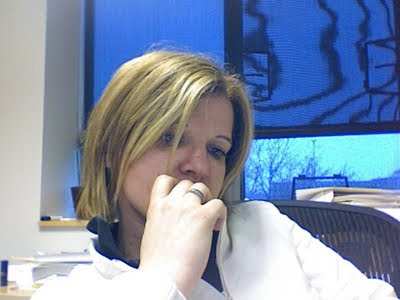 I usually use music and my writing as a way of keeping track of experiences and quotidianity be it memorable or forgettable. Luckily, there are the photos too.

There’s no better way to get a good snapshot of one’s existence that when faced with an expected unknown. What I find interesting about existence is just how clearly one can see certain things in situations that are primarily defined by certain events/experiences. It’s like having bionic vision for a spell and getting to the core truth of things quickly albeit for a little while.

I thought again today how much easier it would be if my medium of choice could be in the realm of movement. I live for movement and yet my mode of expression is writing. I need to be sedentary to do it and yet the best ideas I get come to me when I’m out and about, generally moving quickly, getting lost in some thought while getting to the next thing on the list.

I saw this on the iChat window the other morning. It made me chuckle. Mostly because it’s true.

My people get that. My concept of inferno, personal inferno, is utter lack of movement. Well, that and having to be in it in the company of disingenuity. Force me to be in a state of inactivity and I’ll start bargaining right away to get out of it. I’ll agree with Mephistopheles before he has a chance to reveal the terms of the pact. I’d be willing to recite whatever to get out of it. I guess that’s why I tolerate yoga. Even though I’m confined to the space of a mat, I’m to move while on it.

I had my wayfarer’s on today as I was returning home from a day away. To my right, I could see the quiet Pacific and the sun that was reflecting on it. My hair looked much blonder than it usually does indoors when not touched by the sun. I liked it. The iPod was playing some random track from either Lilly Allen or Kate Bush or, some such singer, they sound all the same to me. It didn’t matter what the iPod was playing which is testament to the actual value of the unique feeling the little moment in time contained.

It was the sort of feeling that tends to get generated when forced to be in the present fully. The feeling that corroborated your already researched and tested sense of self-reliance and why it matters. It always matters. Having faith in one’s self is key. All we have is that, really. Granted, relying on the ones who love you daily helps. But, let’s call things what they are. The reason, the main reason, why those who are big investors in self-reliance are loved well and consistently is because of their investments in self-reliance.

Words were uttered but they mostly served as instrumental soundtrack like an Ennio Mrricone album. They were placid but I have no idea what they were about. I suppose if it's important, I'll hear it again. Thing is, at times nothing should interfere with the poetic beauty of silence. Even music would be like adding salt & pepper to an Eric Ripert dish at La Bernardine.
Posted by B.R. at 1:09 AM

i like the photo. it's one of your 'high-frequency' faces. ;)
"Ago ergo cogito" makes personal sense to me too. One thing to best music would have to be silence, good silence, no doubt!