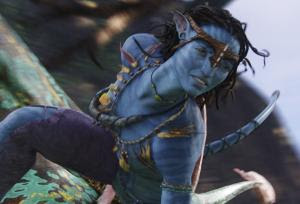 If you've seen Avatar but do not really care to verbalize the fact that you were sort of into the whole 3-D experience, and perhaps even James Cameron, you might find that economy of speech will not quite apply to one aspect of it: the Na'vi language. If you're at all linguistically minded, you're bound to be impressed by this achievement.
In the spirit of candidness, I tend to have little interest in Cameron's work. I'm more interested in Nolan's type of action films, think Dark Knight. But, be it as it may, it is quite impressive to learn about the extensive work and research that Cameron put into this film, the narrative, and the language of the Na'vi. To create the Na'vi language, the director hired linguist Paul Frommer of USC's Marshall School of Business. This site has much to say about the syntax and phonology of the Frommer-concocted language. In sum, impressive stuff. Reading this information on Na'vi made me think the following, "so, basically, Na'vi is like a West Germanic language, verbal and substantive inflection allows for movement within the sentence. Hmm."

A bit from the article says:

The most notable aspect of Na’vi syntax is the freedom of word order. The case system allows all 6 sequences of S, O, and V. Additionally, adjectives, genitives, and relative clauses can either precede or follow their heads.

Nouns and adjectives are tied together by the morpheme a, which comes between them and is attached as a bound morpheme to the adjective. For example, ‘long river’ is either ngima kilvan or kilvan angim.

So, tip of the hat to James Cameron and Paul Frommer for a most impressive cinematic and linguistic project.

I've not seen it yet but will definitely do so soon.

Oh fantastic! I thought visually this movie looks good, but the preview left me skeptical. This convinces me to see it.

I don't care much for 3D and special effects but this movie is worth it.

What's unique about this movie is that it is very well-researched and it gives one the impression that much creative work went into it. And the 300 mill helped too. :) Definitely worth a look, though.

Good but still unfriendly to the 3-D thing.

I saw it in 3D and I'm so glad I did. I'm sure I would have enjoyed it otherwise but as visually stunning as it is the full experience was worth it. All in all just intriguing. I left almost feeling like a sulky little kid. I want to live there. I want to be a Pandora native.