Richard Burton's Excellence and Why I Love It 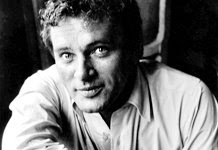 Richard Burton's acting left an impression on me from the first time I witnessed it. HIs delivery was characterized by such ease that I couldn't help but appreciate it. His face seemed to ooze a kind of aversion for affectation and cheap mimicry that I instantly appreciated.

I liked Burton even when he started to act Hollywood. He seemed to do it because he got a kick out of the whole scenster culture.
And who could blame him?
It's kind of tough to let a freak show go unexplored, is it not?

The hardest thing for me to tolerate is cheap imitation.

I have been trying to understand if such intolerance has anything at all to do with some permeating vanity I've neglected to detect before and all I can deduce is: 'nah, not really.'

The reason why I can't stand cheap imitation is because it interferes with authenticity and originality of essence. Furthermore, it delays the learning process. And I really can't stand the latter.

He stands on the opposite end of this aversion.

If you don't know his work, well then, chop, chop, get to it. You're missing out.
And if you're a Shakespeare lover who doesn't know Burton, repent first, and hit Netflix later.

Few do acting the way Burton did. And fewer have his version of chutzpah.

And here's a bit from the Dick Cavett interview of Burton:

Read and view it here.
Tip of the hat, RB.

I liked this.
May I ask why Burton to make a point on faux art?
Also, are you already being cheeky this early in the AM? I'm referring to your hyperlinking of the definition of chutzpah.
Burton was wonderful in Taming of the Shrew, btw.
There, no repenting on this end. ;)

I love him in Who's Afraid of Virginia Woolf

"The hardest thing for me to tolerate is cheap imitation."
Touche.
It's an expensive petpeeve, is it not?

This guy was something else. Dug the Hollywood reference. Everyone is entitled to a few dalliances in life, eh?

I do have to say I appreciated how you phrased this:
'It's kind of tough to let a freak show go unexplored, is it not?'
It rang true.
Thanks.

I dug this, too.
I wonder why so many actors don't take a cue from someone like Burton.
It's all that post-George Cloony absurdity that they all imitate.
Grh.

i like the way you wrote this. you epitomise and inspire economy of language. the piece is very short and quick to read, yet the opinion is strongly and articulately. bueno.

This piece makes me feel existential but not in a pill-popping way, if you know what I mean.
I concur with Liam.