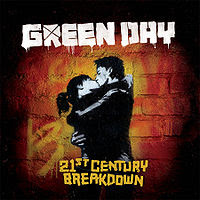 It takes courage to be an authentic artist in modernity. In an age when a lot of the celebrated images belong to not-even-mediocre acts who have just exited prepubescence whose art is merely a product of sound engineering and pseudo-rebellious textile/aesthetic choices, truly good musicians have to work twice as hard to gain the kind of visibility they deserve to have.

Enter Green Day.
They have the courage to be excellent. And that they are.
Remember their 2004 album American Idiot?
Brilliant album. The gods of creativity were good to them then.
They must have worshipped them right because they are great to them now.

Their new album 21-st Century Breakdown elevates Green Day to a new level of brilliant achievement. When listening to tracks like "Before the Lobotomy," "Christian Inferno," "21 Guns," and "Restless Heart Syndrome," I remember thinking to myself how much anxiety they have had to sort through while engaged in the creative process.

A track like "Last of the American Girls" is what sold the album to me. The bass provides the kind of support that you don't hear all that often. It reminded me of the kind of support you feel when your tall, loved one keeps you safe from the jumping members of a mosh pit.
And the lyrics. Well, the lyrics ooze a kind of anxiety- and uncertainty-informed meaning you sort of get by virtue of being a modern being but which you sort of wish you didn't.

It's this dual experience one gets when listening to this album that adds to the overall relevance of the band. I would submit that 21-st Century Breakdown is one of the top albums of 2009. You should definitely listen to it. Furthermore, it was produced by produced by Butch Vig of the band Garbage whose credits include Nirvana's Nevermind.

Green Day is good because it knows how to translate the cultural realities of the times we live in into their music. And lyrics.
This album is full of energy. And intellect. And hope. But the kind that is anxiety-laced.

21-st Century Breakdown captures our modern anxieties and uncertainties dexterously and the only prerequisite course one needs to appreciate it is some experiential knowledge of modern life.

Ergo, I give this album my tip of the hat. And the album is so gripping that I will be reviewing it further on the next videocast for Gendering the Media with Brikena Ribaj.

What a review!
I need to get this, then.
That is quite a bass, btw:
"The bass provides the kind of support that you don't hear all that often. It reminded me of the kind of support you feel when your tall, loved one keeps you safe from the jumping members of a mosh pit."
I dug....

last of the american girls was catchy, as any good pop song should be, but it didn't seem like anything new for them as a band, rather a watered-down, over-produced version of their former glory. that's my first-listen cynical opinion. give me a couple more listens, and i'll probably be singing along. :)

This is interesting. I've always found Green Day to be the kind of band that can 'marry well' social critique with good rock.
Liam's point is also interesting in that even their 2004 American Idiot had some of this uber-processed new pop influence that we see all over the place now.
But, of course, they are a solid band. And naturally, they need to sell their work.
To market, to market.
I look forward to the videocast.

Ha!!
That's the best Freudian slip of the week!!!!

Ha. Green Day, i.e.
I corrected the slip.
I really like this album because, as I just noted on the videocast which will be loaded on iTunes on Friday, they've managed to keep their authentic sound while taking it to a new level. And they also have pretty solid lyrics.
-I get your comment about the over-production bit. And the Butch Vig presence is clearly seen in this one. I just don't seem to have too much an issue with a small measure of this 'production boost', if you will, because I find 'kitsch' to be quite helpful to good content. Musically, this simply works well for me.
And I also got turned on to it after giving it a couple of listens. This morning alone I learn it 5-6 times. High-frequency, indeed.

Well, one thing that I am impressed with is that these guys are still around 10+ years later. Most bands can't pull that. I haven't actually paid much attention to them since Dookie, which I used to have in my collection, and kind of enjoyed until I realized while listening to it that I couldn't distinguish one song from another when listening in sequence. Now, take the songs out of sequence and put them in a shuffle list, and they are totally classic.

Maybe I'll check out their more recent stuff. I've been resisting because of the eyeliner and black monochrome with red tie type stuff they've been wearing, which seems a little affected to me.

I've liked a lot of their tracks over the years.
Their success is deserved. I agree that its easy to get tired of their Green Day-ness but the shuffle does miracles. In good measure, these guys truly rock!