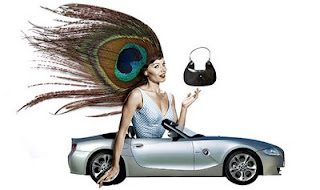 One of the authors I've recently discovered and whose work I'll be reviewing shortly, is featured on a piece on the Times. Geoffrey Miller is an evolutionary psychologist whose work investigates the role evolution plays in much of our spending behaviors.

"Suppose, during a date, you casually say, “The sugar maples in Harvard Yard were so beautiful every fall term.” Here’s what you’re signaling, as translated by Dr. Miller:

“My S.A.T. scores were sufficiently high (roughly 720 out of 800) that I could get admitted, so my I.Q. is above 135, and I had sufficient conscientiousness, emotional stability and intellectual openness to pass my classes. Plus, I can recognize a tree.”

"A Harvard diploma might help get you a date or a job interview, but what you say during the date or conversation will make the difference. An elegantly thin Skagen watch might send a signal to a stranger at a cocktail party or in an airport lounge, but even if it were noticed, anyone who talked to you for just a few minutes would get a much better gauge of your intelligence and personality.
...
“We evolved as social primates who hardly ever encountered strangers in prehistory,” Dr. Miller says. “So we instinctively treat all strangers as if they’re potential mates or friends or enemies. But your happiness and survival today don’t depend on your relationships with strangers. It doesn’t matter whether you get a nanosecond of deference from a shopkeeper or a stranger in an airport.”"

As the adage has it, 'and then he spoke.'
Brands and stuff can only take one so far. One will need to produce speech at some point.

Interesting bit. I'd like to read his book. It's tough not to make judgments about people based on what brands they pick.
I admit to having an interest in people who go for the same stuff I go for.

Obviously appearance and brand choices do matter but the aesthetics needs to be supported by content, eventually.
Interesting article.