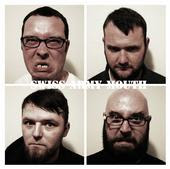 So, I multi-tasked tonight.
Well, that statement doesn't mean a whole lot decontextually.
It's where the multi-tasking happened that's worthy of note. My friend Matt, a wine connoisseur and party thrower par excellence, plays in an instrumental rock band called Swiss Army Mouth.

I did my multi-tasking at club Ravari while we were waiting for Matt's band, Swiss Army Mouth (SAM), to get on stage. Even though the schedule has been unforgiving, I promised I'd go and support his band. So, there we were, surrounded by an absence of lights, a sea of TV's, loud people, my party, and my iPhone on which I was trying to get some paper reading and grading for work the next day. Grading a paper on Foucault at a rock show makes a ton of sense, by the way. Back to the show at club Ravari.

Matt plays bass for Swiss Army Mouth. Swiss Army Mouth's songs are paced well. Their music made me think of the person about town who has places to go, things to do, and no time to waste on a long track. Their sound is the kind that moves with purpose. I reckon, that's why I dig it.

SAM is an instrumental rock 'n roll band and I wish there were more acts out there that followed that same pattern. Economy of language is a great thing in the realm of rock. In the band's own words:

"SAM seeks to melt the faces of those who seek Rock. Armed with an Orange, a Rectifier, 15" bass speakers, and a set of plaid drums, SAM is sure to do just that. Swiss Army Mouth's songs are short and to the point, lending itself well to the instrumental niche. With their longest song clocking in at 2:53, you won't have time to wonder where the vocals are, and you won't care."

I really don't like to talk when I'm at a rock show. I do, however, like to text. Especially with my friend Liam, another good musician I love seeing on stage. During the show I write: "Oh man! I love rock!!!"

And very few people in my address book know what I actually mean by that. It means that I love rock enough to find time to pursue it even when the schedule says 'No!' and other responsibilities need attention.

"i was just thinking the same thing. listening to the hives on the train. :)"

And that's what rock shows do for me. They create an arena in which a bundle of other musical connections are made and past nostalgias fuse with current sound cravings and non sequiturs.

Perhaps Liam is right. It's time to give The Hives another chance yet again. It's been a while. Maybe Camera Obscura will be next.

After the show, I remarked that what I liked about it, other than how cool it is when I see people I know in real life practice their art, was how easily the music S.A.M. played let me process the myriad of things that needed processing that night. The fact that the tracks were short, to-the-point, and denuded of certain ceremonies one is, alas, bound to see in certain rock shows contributed to my enjoyment.

The next day when a colleague asked how my Thursday night went, I succinctly replied, "Went to an industrial rock show to support my friend, Matt's band, graded papers while at the venue, caught up with friends, and agreed on a travel budget with the other half. How was PBS's Masterpiece Theater for you? What's Kenneth Branaugh up to?"

I've been neglecting my rock lately. Time to rectify.

Few things compare to the power of THE ROCK!

You are way too busy. I suppose it helps that multi-tasking comes natural to some, right?

I liked this:
And that's what rock shows do for me. They create an arena on which a bundle of other musical connections are made and past nostalgias marry current sound cravings.

Don't know what's funnier: the name of Matt's band, his actual teeth picture, or you getting work done at a club at 11:00 pm.