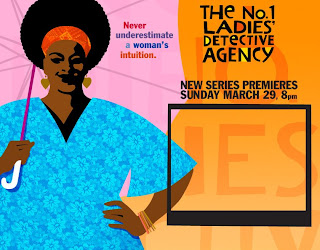 I have developed an interest in Botswana as of late. My knowledge of the country of Botswana is very limited as I have never had an opportunity to be exposed to it. I am trying to rectify this now.

Botswana's economy is growing rapidly and it is currently classified as a middle-income country with a standard of living comparable to Turkey. But not all is hunky d'ory as Botswana has also been greatly hit by the AIDS pandemic and one in six Batswana has HIV. This land-locked country, which has one of the strongest democracies in Africa and a thriving culture, does not seem to have the kind of visibility in the West that it could have. And that's where Hollywood comes in.

And film is rarely irrelevant.

The late Sydney Pollack and Anthony Minghella worked on a Botswana-related project together in 2007 and after hearing about it I was instantanously intrigued. I respect both artists' work mostly because of their savvy of multiculturalism.

Anthony Minghella's work has always struck me as one that reflects the sensitivities of a multicultural person. Think, The English Patient or even the little-known 2006 title Breaking & Entering, which, by the way, is another excellent film.

I think of Minghella's work as a reflection of the global mega-culture. He manages to keep macrocontext in mind while telling the beautifully idiosyncratic micro stories of the little people. 'Where the normal people are, that's where true storytelling resides,' seems to be a permeating theme in his work.

I do believe that a a lack of linguistic and cultural diversity in film irrevocably translates to bad film. That was never Minghella's problem. Not Pollack's. One of Minghella and Pollack's last works of love was a Botswana-located story adapted for HBO called The Nr. 1 Ladies' Detective Agency. The show played on BBC first and it is currently being broadcast on HBO.

The premise of the show is the following:
After her father's death, a Motswana woman, Mma Precious Ramotswe, sells the 180 cows her father left her and opens up her own business: a detective agency located in Gaborone, the capital of Botswana. Precious is a full-bodied, voluptious woman whose confidence stems from the love her father gave her. She is also smart and endowed with a healthy intuition. The episodic novels focus not only on her detective-oriented pursuits but also the finer details that make human beings messy and interesting.

When asked to take good care of herself when dealing with hard cases, Mma Ramotswe convincingly says, 'I'm made of hard stuff.' Mma Ramotswe is portrayed by the sultry American musician/actress Jill Scott. She lights up the screen and moves with a kind of rhythmic ease that one can't help but follow.

In sum, I give The Nr. 1 Ladies' Detective Agency my thumbs up. It kept my interest and made me want to ask questions about Botswana and the nature of the economic and overall development the country is undergoing. The show also depicts the ramifications of a faster paced economy and overall progress. And yet, the pace of the storytelling is laced with a kind of slowness that's actually appealing, poetic even.

Some of the themes the show concerns itself with are:

HBO will be showing 13 episodes and the program should be available for general viewing shortly after.

I don't know much about Botswana either but this looks like sth I'd enjoy watching.
It's OnDemand, too, I bet, right?
Jill Scott has an amazing voice. I have not seen her act before, so it'll be interesting to see how she translates on the screen.

I don't know much about Botswana either but this looks like sth I'd enjoy watching.
It's OnDemand, too, I bet, right?
Jill Scott has an amazing voice. I have not seen her act before, so it'll be interesting to see how she translates on the screen.

We had a report fair on Africa when I was 11, and I reported on Botswana. Sadly, I remember nothing from my report.

kena, I can't believe they've made a series of films out of the books. I have read them! I will def. watch this.
thanks.

Too funny! I've read the books, too so I'm looking forward to seeing this. Don't have HBO so I've got to wait unless y'all are throwing a party.

I have wondered why there is so little African representation on mainstream TV, so this is good. Will check it out.

Can the non-Hbo-ers invite themselves for a peek?
-m

Definitely going to check this out, too. I know nothing about Botswana.