No Kebabs in Lucca, Italy 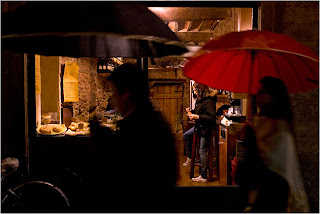 "In this deeply conservative city, where even Sicilian food is considered ethnic, there are already four kebab houses, testaments to Italy’s growing immigrant population and the fact that many Italians, especially young ones, like eating non-Italian food. Offering kebabs at $5, the restaurants are also a bargain in difficult times.

Under the new law, these four can stay, but the banning of new ethnic and fast-food restaurants within the city walls has struck many here as contrary to the rules of free-market capitalism and the notion that Italy can offer more than visions of its long-dead past.
...
Lucca allowed the kebab shops to open in the first place only because city officials did not know what they were, Filippo Candelise, a Lucca City Council member who handles economic development, said in a recent interview in the medieval palazzo that houses city government.

Mr. Candelise defended the new regulation as essential for Lucca’s future. “We absolutely reject the ‘racist’ label,” he said. “We simply want to preserve our cultural and historical identity.”

So, if you find yourself in beautiful Lucca and you might be in the mood for a kebab, stop and stock up in Rome first and then head up. I'm certain the "buccellato" will taste scrumptious then.

I don't care much about meats anyway, as I tend to roll vegetarian-ly mostly, but I do care about the, what I call, the democratization of the tongue.

This kind of thing makes sense to me after having experienced some parts of Europe, I have to say....

I think I would miss kebabs though. And I also don't do meat....

Something else is happening here in my mind and that is perhaps a form of racism?!
But then again I don't much about Italy or issues of equality in that country.....

I have never been to Lucca. However, I think I sort of get this.
The world has MUCH to do to bypass racism and inequality.
I just don't buy the whole 'we're preserving tradition' thing.....

Hmm. I do not get the need the 'regulate' culinary options. It can't just be about the food here. The world has much to learn about living sans cultural frontiers and, I reckon, Lucca is not one such place.