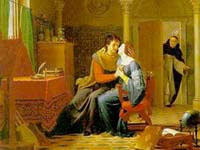 As I announced a few days ago, production has started on a new podcast series. The first podcast series, Gendering the Media with Brikena Ribaj will continue to have new pieces added to it every Friday. Most of these pieces will be on modern applications of literary theory.

The new series will be available on iTunes soon.

In the meantime, you may listen to it here.

This first podcast is a general introduction to the concept of love as "minne," the Middle High German word for courtly love, and "caritas/cupiditas/prima voglia" as Dante refers to it in his own work. The two authors I evoke in this first piece are Hartmann von Aue and Dante and their respective works to which I pay tribute are diu klage, Gregorius, Convivio, and the Divine Comedy.

Thank you for this.
I love the Middle Ages and I don't think we can truly understand modernity without saluting this time first.
I mean this.
Are you going to post any of your academic work in here? I know that academic journals are sometimes tough for average folk to get a hold of. I'd like to read more of your esoteric work.
Thank you.

The interpretation of the 'approved gaze' on Hartmann's Lament got me.

I really appreciated this as I'd like to learn more about the time frame/
thx, bri!

Food for thought.
The idea of the look on the face of the loved one is sth I have thought about but have not quite verbalized.
Thanks, BR!

I wonder if you are going to mention Chretien in more specific term in any of the future pieces?
Iwein is puzzling me at the moment.
Especially Sir Kei.