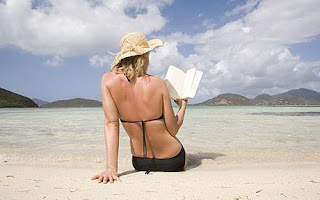 Definitely worth a read.

"A study of reading habits showed almost half of women are 'page turners' who finish a book soon after starting it compared to only 26 per cent of men.

The survey 2,000 adults also found those who take a long time to read books and only managed one or two a year were twice as likely to be male than female.

Men are also more likely to have shelves full of books that have never been opened.

The only similarities between the sexes came among those who have two books on the bedside table at once and who start one book on the middle of reading another, switching easily. Twelve per cent of women were in this category – exactly the same number as men.
...
About four in 10 of the 1,500 said they had lied about what they had read to impress friends or potential partners – 46 per cent of men and 33 per cent of women.

"Men are also more likely to have shelves full of books that have never been opened."
Why is that?!
I wonder about that, too.
I suppose reading culture comes with its cliches and problems as basically any culture. It is quite interesting though that at the core of most things lies [in]security.

I like the new green color scheme over here. It's cheery.

I fall into that 12% category of people who read multiple volumes at once. I don't own many books that I haven't read, and I don't see the point in lying about what I've read, unless we're talking about the high school days, when I'd rather stick a fork in my eye than finish a novel by Nathaniel Hawthorne. Good old Cliff's Notes for that.

Funny coincidence that the article pic is what it is....
I agree with Sra.
I don't get the point of telling people you've read stuff you haven't. It's not even puerile. It's perhaps a sign of neurosis, or something.
I haven't really thought to assgn gender to reading habits but this is good food for thought.
How's things?
I think I'm getting what you mean by your set of 'aesthetics.' Any posts on the topic anytime soon? Inquiring minds want to know.

Simply because I have not read all the books I own. Far, far from it.

I buy the premise, too.

Well, you can't learn everything from books ...

I also don't quite think of reading habits as gender-specific, but interesting.