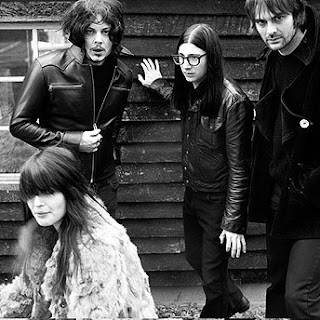 Jack White is a man about town (Nashville that is) who has his hands in a lot of promising pies. Two of them being the White Stripes and the Raconteurs. His appetite has gotten healthier, however, and he is now the frontman of a new act, Dead Weather.

I started developing an active interest in Detroit-based artists back in 2001 after living there for a good part of the year. White Stripes was one of the bands I started paying active attention to and the interest has taken good root. Especially, White Stripes who have delivered over and over again mostly on account of Jack White's idiosyncratic drumming. Jack White has now settled in Nashville and his new projects are coming out of there.

Something very interesting is happening here with respect to location and the actual value of geography-specific creativity. Jack White has been positively vocal about living in Nashville and why he has chosen to make the city his home. The music scene is rich and artistic networking inimitable. Another point of interest when discussing the validity of the creative class and how it desperately needs live feedback. For where the creatives roll together, new acts are born. I look forward to Dead Weather's debut in June.

There is a definitely a viable correlation between place and creativity.

And a very valid reason as to why a certain someone is more prone to be drink from the fountain of creativity when in the Pacific Northwest...? But I digress.
I look forward to June, too. Jack White is a talented musician and I'm bound to be impressed, too.

And this is a cool photo!

WOW. Three acts, one frontman. I guess recession has no claim on Jack White, Jack.
Or as they say, I got mine, Jack.
:)

That's good to know. I was never overly enamored of the White Stripes, but if there's a little Nashville influence in his new band, I may enjoy it more.

Have you ever seen a movie called Coffee & Cigarettes? It's a collection of strange short vignettes, each involving coffee and cigarettes. There's one with Jack and Meg White, where Jack makes a Tesla coil. Every time I hear about Jack White, I can't help but think of his evil scientist face when he throws the switch on the Tesla coil. It's bizarrely funny.

What Polly noted. Thought would ask to...