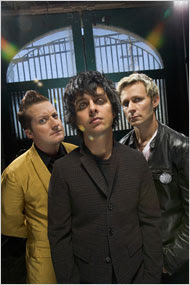 I was just informed that Green Day will be going musical. As in the genre. Green Day's superb album American Idiot, now a musical, will run in the 2009-10 season from Sept. 4 through Oct. 11.

I approve of Green Day. Let's face it. The Killers and a plethora of other indie bands in the US and on the other side of the pond, would not be the bands they are without the very solid Green Day influence. And I enjoy the kind of androgyny that Billie Joe Armstrong sports.

Now, I don't do musicals. It's a genre that says nothing to me. Generally, if I don't like or approve of something, I show my lack of interest and dislike by not discussing it or not including it in any way in my own discourse. Ignoring something is kinder than verbally addressing it negatively, I find. Ergo, the extreme economy of speech on this genre.

Let me explain why I don't do musicals. My musical diet since basically childhood consisted of the opera and rock. As a teenager, I fell in love with punk and, well, c'est tout. With this kind of conditioning and acquisition, there is no room for musicals. To me, musicals ooze a kind of affectation I can't tolerate. They actually vex me.

Having said that, I would see the Green Day musical. Why? Because it's Green Day. And because it's in California. And those who know me, know that the latter is reason enough!

So, if the musical goes punk, and it seems to be going punk with this particular project, I will have to definitely support it.

"The punks are invading the theater. A new musical production adapted from “American Idiot,” the best-selling album by the punk band Green Day, is scheduled to make its debut in September at the Berkeley Repertory Theater in California.

Berkeley Rep is to announce Monday that the new work, also titled “American Idiot,” will have its premiere as the first production of the theater’s 2009-10 season, and run from Sept. 4 through Oct. 11.

The musical is a collaboration between Green Day — the Bay Area rock trio consisting of Billie Joe Armstrong, Mike Dirnt and Tre Cool — and Michael Mayer, the Tony Award-winning director of “Spring Awakening.”

The project is also causing some shock to the band members, who acknowledge that they had grand aspirations for “American Idiot” but perhaps not quite this grand."

I will be quoting this: "Ignoring something is kinder than verbally addressing it negatively."
I am so there! Would definitely watch it, too. Billy Joe comes across so honestly, I agree.

Wait, what?!
You see, that's what marks these guys as good artists. They lay the groundwork and then the others imitate.
At their best, bands like The Killers, The Vines, The Hives, all the 'The's are great mimics!
Excellent news. I had been wondering about their newer projects. And American Idiot is a brilliant album!
I know that you still privilege Hot Fuss over anything that came out in 2004 but might you reconsider?

Oh, B.R. You are breaking my heart with this dislike for musicals thing. What about Rocky Horror Picture Show? Sure, it makes fun of musicals, but in a celebratory fashion. (Plus, Tim Curry was actually kind of hot as a transvestite.)

And what about Jesus Christ Superstar? Andrew Lloyd Webber's best work, imo. It's got that 60-70's rock vibe, and Judas and Jesus in the movie version are some of the best singers I've ever heard. I also love the more human perspective it gives to the myth.

Fiddler on the Roof, The Sound of Music, Guys and Dolls, You're a Good Man Charlie Brown, The Fantastiks... surely someone like you could appreciate these things.

Maybe Greenday will give you the taste you need to jump into this most excellent area of music.

I don't really do musicals either but I have to say I enjoy a few titles out there.
There's got to be something to the genre if Green Day's trying it out, eh?
But then again, there's no accounting for taste.

Your dislike of musicals does sound pretty unequivocal. Sra lists some good ones. Didn't you once refer to Evita favorably?
This new Green Day move will get my attention, too. American Idiot was a super good album!

Ah, mimics? I reckon, they are. And, for some reason, they're still likable.
I don't necessarily privilege Hot Fuss over American Idiot. I simply, and a tad narcissistically identify more with Hot Fuss.
Incidentally, I just recorded a Videocast today explaining my personal philosophy on 'tastes' and why some people tend to like what they like.
-Ah, Sra, Good. Great list.
You might be interested to know that the videocast I just recorded today addresses my dislike of the musical genre. I provide some form a context in there. The episode should be edited and up and running by the end of the week.
Thanks for the list. For some reason, I didn't mind Evita but it had more to do with Jonathan Pryce's white shirt and less with the music.

These guys 'arrived' way faster than most musicians of the same genre.

"With this kind of conditioning and acquisition, there is no room for musicals. To me, musicals ooze a kind of affectation I can't tolerate. They actually vex me."

You crack me up, Bri!!
Not a fan of the musical genre either.