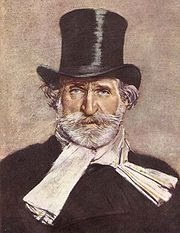 Some snobbism is allowed when Verdi's work is at stake. At least, according to many Verdi-informed music lovers. Since I have loved his work since I was able to read, I consider myself worthy of voicing an opinion on the matter.

Incidentally, I am currently reading much about Verdi's impact on Italian/European politics of the 19-century and the more I become involved with the topic, the more I see my admiration for the composer morph into yet another (much deserved!) cognitive appreciation. Experientially, I have always 'gotten' his work. Now it's cognition's turn to catch up.

As a supporter of the arts, I list Verdi as one of the highlights of my upbringing and life. Watching things like Casa Ricordi didn't just give me musical pleasure for the moment, it also taught me concretely about the pragmatic aspect of creative genius. Verdi epitomizes just that. Having overcome an amazing sea of hardships, the composer manages to maintain his stoicism while creating some of the most soul-feeding melodies the West has yet to experience.

Watching a Verdi production live is something that the language cannot adequately contain or explain.
Nabucco, Aida, and Traviata were created to be experienced by sold out audiences and Verdi, like very, very few artists, had the right vision to know that when people would love his work, the would love it in great numbers and with much passion.

I read an interesting bit on the Times today about the use of technology in broadcasting and how it is making an impact on live productions of operas as well. I think Verdi would have been a fan of the notion of allowing many people to experience his works in almost perfect synchronicity.

Something like La Scala times 1000 would have given him pleasure, I think.

The composer produced the kind of music that inspired not only the bona fide music lover but people at large, peasant and nobleman alike.

Would I like to watch Aida on a huge screen in San Francisco when it is being performed live in Milan? Yes.

Would I rather want to watch it at La Scala? Yes.

This scenario strikes me as a rare yes/yes one.

"The Teatro Alla Scala in Milan broadcast its gala opening night, a performance of Verdi’s “Don Carlo,” live on Dec. 7. At the New York showing, in the Miller Theater at Columbia University the Milanese glitter of tuxedos, gowns and dripping jewels on the screen contrasted with the bulky sweaters, down jackets and eccentric facial hair of an Upper West Side crowd."

The entire article is here.

And might I treat you with Verdi's "Va Pensiero sull' ali dorate" from his opera Nabucco? This particular production comes from 2001 at the Metropolitan Opera House.

Verdi is a great example of Romanticism and the fervor for freedom and independence in Europe. He, in a way, and acc. to me, is Italy's answer to Germany's Beethoven.
Even Wagner, perhaps.
"Experientially, I have always 'gotten' his work. Now it's cognition's turn to catch up.
I liked that.

I'd also see him on a gigantic screen.

The tone of Nabucco is especialy political having in mind Italy in its pre-unification state.
A fabulous operatic contribution, no doubt.
I also think of someone with the ability for comprehensive thought when I think of Verdi. He didn't just get music, he got the importance of meshing political/cultural context with his own musical/creative vision.
Wagner would say a Totalkunstwerk, I'd say, well, genius. And in light of Romanticism, 'genius' is the only, 'right' word to use!
Love Verdi!
Like you, I simply have to.

"Experientially, I have always 'gotten' his work. Now it's cognition's turn to catch up."

Verdi needs to get more attention on US opera stages. For some reason, Puccini is more ubiquitous. Or maybe I just like Verdi too much. Who knows. :)

I've always maintained that what makes Verdi relevant and musically and historically significant is how much he means to Italians and Europeans politically and intellectually as well.

I'd prefer La Scala but I'd never say NO to a Verdi show. I couldn't.

I noticed a while back that you reviewed Anna Netrebko. Have you seen her live?

I need to revisit Verdi.

It's not just music, it's Verdi.
For everything else, there's Mozart. :)

I was lucky enough to see Nabucco live while on a trip in Germany.... simply phenomenal. It is indeed "something that the language cannot adequately contain or explain"

I suppose it's too costly to put on a Verdi production. But then again most things of value are costly.

There's something great about the immediate power of a live Verdi opera. I would, however, watch it on the big screen, too.