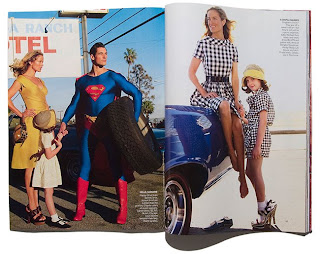 I like Vogue. I just find it too predictable. Moreover, I get annoyed sometimes by all the praise that's thrown Anna Wintour's way as if she is the only one with any understanding of the text of clothing.
Granted, Wintour is insightful. Brilliant, actually. Vogue's editor par excellence has been leading American Vogue with an almost Thatcher-esque hand. What I have been observing is that the magazine keeps featuring the same celebrity faces on the cover. There's Gwyneth. There's Reese. There's Rachel. And then we start from the top again. Wait, what about the fluidity of fashion and most importantly the versatility of beauty?
I am also a fan of constancy and that's where I get sold on Wintour's choices. As much as I'm thrilled by novelty, I also love and appreciate well constructed routines and patterns. And Wintour's been providing the latter with Swish watch-like precision.

However, I do feel that the magazine could innovate more and bore me less.

Like I mentioned, I enjoy Vogue and I want to continue to support it but in order for me and people who feel like me to do so, a faster speed and active awareness to quotidianity is needed.

I just saw this on the Times this morning. I'm not the only one who's been feeling that Vogue is not being too daring and explorative. This is a very well-written piece. And no, it's not just about fashion. It just never was.

"Many do not seem to know how to relate to women in their 20s, except to throw celebrity pictures and clothes at them. Although the median age of its readers has hovered around 34 since Ms. Wintour became editor, in 1988, you don’t feel that the magazine has considered how changes like social networks and Web-based subcultures have influenced women’s ideas about themselves. This lack of awareness is reflected in Vogue’s pages."

Style is always relevant. I don't quite get Wintour's style, actually. What's with that aged bob, anyway?

Especially in this economy, if Vogue wants to survive and not go for a 'bailout' it needs to adapt. Most people have simply moved on from the hard copy era. Now it' all about facebook, blogging, wireless communication. Web 2.0 age, Anna Wintour. Adapt!

It's this whole disassociation from reality thing that some high fashion editors don't seem to fully be aware of....

I definitely like Wintour. But she seems to over-project a sense of expertise and 'omniscience' that's oh-so 1999 to me. We are in a new age now and I don't think she has quite caught on. Perhaps she needs a crash course in Web 2.0. Heck, we all do for that matter. But I do remain a Vogue fan and have faith in reinvention.

I always found that the best style was the one that was context-appropriate. Maybe that's why Chanel is always in style. Classic lines seem to go with any situation and context.

Adjust to survive. We're all doing it so why should the the fashion world lag behind?

To do well you need to reach the masses. Wintour is no exception.

I've noticed that too, the same Hollywood faces on the cover. And, yes, Amy L. is a great photographer. But so are so many others. Shouldn't more talent, editorial and otherwise, be featured on Vogue?
I think, yes!