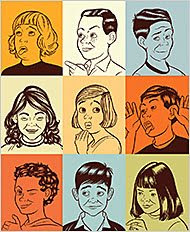 This is a very good piece on the language and 'culture' of teasing and how it differs from bullying.

"As they departed in sex-segregated lines, my daughters stood transfixed. Serafina asked me, “Why did that girl try to put the crab in the boy’s pants?” “Because she likes him,” I responded. This was an explanation Serafina and her older sister, Natalie, only partly understood. What I witnessed might be called “the teasing gap.”

"Teasing is just such an act of off-record communication: provocative commentary is shrouded in linguistic acts called “off-record markers” that suggest the commentary should not be taken literally. At the same time, teasing isn’t just goofing around. We tease to test bonds, and also to create them. To make it clear when we’re teasing, we use fleeting linguistic acts like alliteration, repetition, rhyming and, above all, exaggeration to signal that we don’t mean precisely what we’re saying. (“Playing the dozens,” a kind of ritualized teasing common in the inner city that is considered a precursor to rap, involves just this sort of rhyming: “Don’t talk about my mother ’cause you’ll make me mad/Don’t forget how many your mother had.”) We also often indicate we are teasing by going off-record with nonverbal gestures: elongated vowels and exaggerated pitch, mock expressions and the iconic wink, well-timed laughs and expressive caricatures. A whiny friend might be teased with a high-pitched imitation or a daughter might mock her obtuse father by mimicking his low-pitched voice. Preteens, sharp-tongued jesters that they are, tease their parents with exaggerated facial expressions of anger, disgust or fear, to satirize their guardians’ outdated moral indignation. Similarly, deadpan deliveries and asymmetrically raised eyebrows (Stephen Colbert), satirical smiles and edgy laughs (Jon Stewart) all signal that we don’t entirely mean what we say."
Read more here.

There is a huge line between bullies and teaser. Good-natured teasing is a good tool of learning how to find a nice in a group and adjust.

I find myself to be slightly socially retarded, in that I am frequently unable to tell when someone is joking or teasing. I tend to assume people are being serious by default. But I also think I have a good sense of humor; it's just not the same sense as everyone else seems to have. It's like my brain doesn't pick up on some of these subtle cues.

If humor, intelligence, intellect, or sheer largess of being are used to make a point forcefully then it's a case of bullying. Per me.

Joking and enjoying humor in a group is a healthy part of relating. Absolutely. The more, the better and the more adjusted the person.

Teasing respectfully is a sign of intimacy, I always thought.

it's healthy to learn to relate to others with humor.