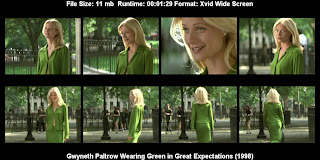 It's one of the more aesthetically rich films by Alfonso Cuaron.
I thought of the uber-talented Cuaron today while talking to someone who reacts to his work in a similar fashion.
Cuaron's filmic adaptation of the Dickens' novel remains to this day a favorite even though the literary text is not represented as authentically. But then again that is the beauty of interpretation. I believe Dickens would not mind many of Cuaron's choices, especially his poetry of color.
Here is a music video of the film. Notice the green texts featured therein.

Wow! That is green. The film received mixed critical reviews but will now give it a shot.
That is some outfit.
Why so much green?

"Ha! Great Expectations. But of course!"

Ah yes, I had forgotten this one. But is was well done, I thought.

I remember liking it exactly because of its almost over the top, romanticized view of class climbing.
Excellent, excellent soundtrack.
Tori Amos' song Siren is fabulous!!

And I have also though Paltrow's green outfit was in a way, 'the making of her.' That is what I call a great text. Green, the color of 'jealousy' but also the color of nascence and rebirth.
Also, Cuaron 'gets' color.
What did you think of the 'grey' in Children of Men?
As they say, totally brill!!

That is green!
Under-appreciated film. A fan of Cuaron as well.