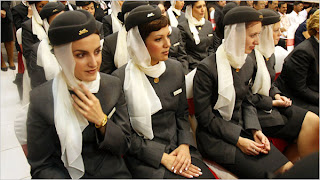 "Rania Abou Youssef, 26, a flight attendant for the Dubai-based airline, Emirates, said that when she went home to Alexandria, Egypt, her female cousins treated her like a heroine. “I’ve been doing this for four years,” she said, “and still they’re always asking, ‘Where did you go and what was it like and where are the photographs?’ ”

Many of the young Arab women working in the Persian Gulf take delight in their status as pioneers, role models for their friends and younger female relatives. Young women brought up in a culture that highly values community, they have learned to see themselves as individuals.

For many families, allowing a daughter to work, much less to travel overseas unaccompanied, may call her virtue into question and threaten her marriage prospects. Yet this culture is changing, said Musa Shteiwi, a sociologist at Jordan University in Amman. “We’re noticing more and more single women going to the gulf these days,” he said. “It’s still not exactly common, but over the last four or five years it’s become quite an observable phenomenon.”

That was an interesting point about women in the US pursuing the same profession in the 50's and 60's. It's a start. The double standards out there are just so depressing.

Definitely interesting. So much progress needs to be made in the realm of feminism across the globe. As mentioned recently, at times we forget that the reality here is not mirrored in other parts of the world.

Interesting. When women are allowed to be and pursue what they desire, true progress can happen.

So much more progress needs to be made. When women are kept down, the very artistic impulses of a culture are kept down.

But it's really great that so many articles and books are featured on the topic. Awareness first, change second.