Ari Gold Is the Making of Entourage 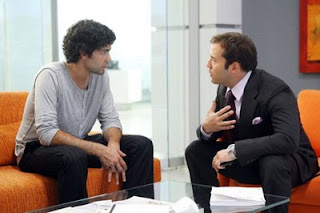 (Jeremy Piven's character of 'Ari Gold' is on the right.)

I was never interested in the HBO show Entourage. For some reason its charm never rubbed off on me. But when Jeremy Piven was awarded a third Emmy in a row for his portrayal of Hollywood super agent Ari Gold, I thought I would give it a bit of a chance. Season 5 is the only one I watched and I'm glad I did because during the experience I got to learn about the character of Ari Gold. There are a lot of snore moments in this show and the only reason to watch it, per me, is to see Jeremy Piven's Gold in action.

Ari makes other hyperactives feel gotten. He gets the pace of life of a hyperactive and he unapologetically humanizes the essence of an overachiever.

Yes, he resorts to crudeness quite often but what makes him likable, even relatable, is his brutal honesty vis-a-vis those he truly loves and appreciates.

The episode length is perfect for those of us who are a) pressed for time or b) are of the hyperactive persuasion. Another thing I discovered in the episodes of Entourage, Season 5 is that the subtext of gender is quite fascinating. I read up on the show and many of the reviews say that some have a hard time with the show's premise. More specifically, the show does not have many strong female characters and it's too much representative of male speech.
I am not one of these people.
To those who say that the show lacks strong female characters, I say, I see you and I raise you Dana Gordon. Even Amanda.
The show's creator Doug Ellis wrote a show about the lasting value of true friendship within the bounds of solid homosociality and that it is, de facto, the only thing one needs to survive the plastic nature of Hollywood.

Let me provide a bit from the show. In here one sees Ari Gold in a therapy session with his wife.

It's the only reason I watch the show too.
I became a fan of Billy Walsh, too and really a shirt that said Suits Suck for a while.
It's a well-written show, I agree.
And Ari, well, Ari makes it. Period. thks.

And the other guys are not totally bad. It's that Jeremy Piven is brilliant as Ari Gold that he eclipses every body else.

Never seen it, but I'm always on the lookout for a good show to watch on dvd, since I don't have cable. And I liked Piven in Grosse Point Blank.

Piven has set a new bar for acting.
I get why he's liked. :)

Piven has set a new bar for acting.
I get why he's liked. :)

Ari Gold is like Larry David. On speed. Actually LD is on an episode as a client of Ari's.

Have you heard of the real Ari Gold? He's been performatively challenging heteronormative concepts (not to mention anti-semetic stereotypes)as an openly gay pop singer long before the show Entourage came about. There's an interesting dialectical binary that exists between this fictional heterosexual pushy Jew character and the real life openly gay sex symbol/singer. He writes about it himself in this article "Will The Real Ari Gold Please Stand Up."