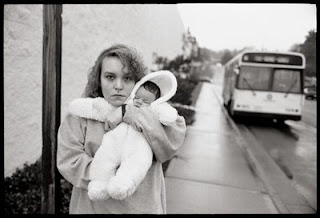 In case you have been wondering about pregnancy rates among evangelicals, The New Yorker has a gripping piece on it. A bit says:
"The gulf between sexual belief and sexual behavior becomes apparent, too, when you look at the outcomes of abstinence-pledge movements. Nationwide, according to a 2001 estimate, some two and a half million people have taken a pledge to remain celibate until marriage. Usually, they do so under the auspices of movements such as True Love Waits or the Silver Ring Thing. Sometimes, they make their vows at big rallies featuring Christian pop stars and laser light shows, or at purity balls, where girls in frothy dresses exchange rings with their fathers, who vow to help them remain virgins until the day they marry. More than half of those who take such pledges—which, unlike abstinence-only classes in public schools, are explicitly Christian—end up having sex before marriage, and not usually with their future spouse. The movement is not the complete washout its critics portray it as: pledgers delay sex eighteen months longer than non-pledgers, and have fewer partners. Yet, according to the sociologists Peter Bearman, of Columbia University, and Hannah Brückner, of Yale, communities with high rates of pledging also have high rates of S.T.D.s. This could be because more teens pledge in communities where they perceive more danger from sex (in which case the pledge is doing some good); or it could be because fewer people in these communities use condoms when they break the pledge."

Those over obsessed with certain things tend to overdo these very things.
Information is power. If these teens were informed, they wouldn't have to face such things.

The more a subject gets 'eclipsed' the more interest it will generate. Evangelical pregnancies are a good testament to the importance of education. In my view, at least.....

I agree, the more education the better. Kids are going to have sex anyway, and it's better if they understand how to do it safely. And more education may actually help some kids decide to wait.

Education, it does solve most problems.