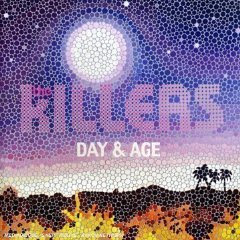 Granted, I'm a fan of The Killers. Their music has influenced my tastes from 2004 to the present time quite a bit. I adored them when they were not very well known and I keep adoring them now that they are mega huge. However, a good lover of music is (or perhaps needs to be) also an informed and critical appreciator.
Having said that, I enjoyed Day & Age for the most part. It's not Hot Fuss and I'm not sure it's fair to compare their senior project to their freshman stroke of genius, but I couldn't help it.

I'll be reviewing this album a little differently. This time I'll post a conversation I had with my music expert friend, Liam of the Salt Lake-based band Calico.

Liam: joy ride instantly made me think of new york with the latin/puerto rican funk groove. it's very 70s. i actually wondered for a few seconds if the strokes had taken a slightly broader approach to music, but then it became apparent that it was flowers singing. i still think it's very new york

losing touch borrows from some 80s synth pop with just enough pre-grunge 90s rock. the killers are so obvious to me with their influences, but they always manage to avoid any sense of anachronisticity.

Brikena: Agreed. What I do like about them though, which I think goes unnoticed more often than not, is their ability, well, Flowers' ability really, to masticate the existing 'music canon' thoroughly and in an undiscriminating fashion. Granted, artists have to be mimetic, by virtue of their artistic compulsions. These guys, however, innovate 'traditions' almost too effortlessly.
They remind one of really good plagiarizers. It's as if they are saying: "Yes, we copy. Now, you need to prove where the copying ends and the innovation begins."

Should you check out this album?

Most definitely. If nothing else, they pay such good homage to rock&roll. They're the ultimate example of the studious student who is not afraid to try to surpass the teacher.
Ah, and they innovate. Quite dexterously.

I was wondering about the album/ I Like the single, Human, just fine. I guess it's tough to match the uber-great success of Hot Fuss.
Will check it out.
I liked the format it was reviewed this time.
thks.

I am liking Joy Ride, too. Funky, yet true rock!

They just seem to get the subtext almost as well as the big, great guys of the 60's. There's something truly unique about these guys. It's talent, yes, but also studied skill, I'd day....

And I appreciate the musical references you're mentioning here.

In some musical traditions imitation is celebrated, like in jazz, where it's called "quoting" when a soloist inserts the melody of a different song into the chord progression of the current song. Another thing about jazz that's different from most musical genres is that classics (or "standards") are more celebrated than original pieces. This is starting to change a bit, but it's still the norm for artists to record their own take on standard songs instead of writing original songs.

So yeah, plagiarize away, Killers.

i keep going back to them so i'll make sure to check this out, too.

i keep going back to them so i'll make sure to check this out, too.

thks for the review. will def. give it a try. happy day of thanks!

This is a good album!