Brandon Flowers Is Ticked Off! 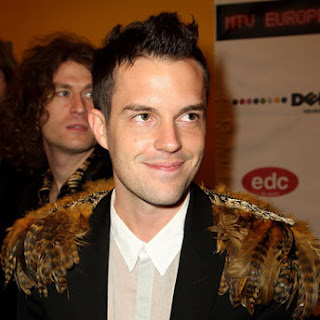 Granted, the lyrics of Human are a tad odd. Well, for lack of a better word, they are grammatically problematic. Flowers uses the noun 'dancer' in the predicate which is, well, not the best of choices.
The chorus says: 'Are you human or are we 'dancer'?'
Many people are speculating that he's actually saying 'denser.'
I am not one of these folks. While I did find the lexical choice odd, I did some research and found out that he is actually making a deliberate reference to Hunter S. Thompson's quote: 'We’re raising a generation of dancers.’ The only problem is that Thompson couched the noun 'dancer' correctly. Flowers not so much. But then again poetic license might be worth something here.

Here's the a bit from the RS on the topic:

The Killers’ Brandon Flowers continues to be frustrated by fans being frustrated with the lyrics to the chorus of his new single “Human.” “Are we human, or are we dancer,” Flowers sings, imploring that the ambiguous word is the grammatically-incorrect “dancer” and not “denser.” “That sucks a bit. I don’t like, ‘Are we denser?’ as an alternative,” Flowers said. “I really care what people think but people don’t seem to understand ‘Human.’ They think it’s nonsense. But I was aching over those lyrics for a very long time to get them right.” Part of that time aching was evidently spent reading books by Hunter S. Thompson, as Flowers himself has admitted the “dancer” line was inspired by the former Rolling Stone contributor.

Awkward syntax, but if that's what the guy says, then cool. Brandon should do another song on it. :)

Was he complaining in that jacket?
I guess, when you come up with problematic syntax, you have to be able to take criticism, Brandon!

Was he complaining in that jacket?
I guess, when you come up with problematic syntax, you have to be able to take criticism, Brandon!

That's quite a getup he's got going on here.
But I guess if he wants to use a literary reference maybe it could be placed in the right syntactic order?

He should have ached over those lyrics a little longer, methinks.

sra:
you get the cake again, for best comment of the day!

Hard to believe all these retards that listen to rap being critical of the syntax here.

It's an interesting song. Be glad of it. There are few enough of those.

lol, most of todays youth are very literal minded.

They think 'booty juice' is cool, but 'Are we Human or are we Dancer' offends them.

That's because they are NOT human or Dancer.

Ha. this guy/gal's comment cracked me up.
I agree, though.
People are insulted by bad syntax?
Puuuuhlease!
See if you can make sense of a Lil' John 'song.'

wow ffs if you mind the syntax just dont listen to it.
if you think its there by a mistake you should have your brain checked.

Not to be petty, Anonymous, but it's actually '...it's there by mistake.'
Never forget the little apostrophe otherwise the SYNTAX will suffer.

But as the post intimates, The Killers' music needs to be appreciated as is.