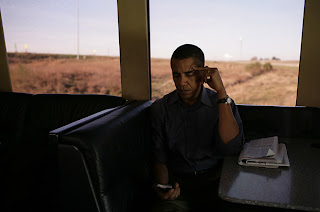 The candidate who understood the crucial power of technology and truly democratic nature of the internet won. The electoral college ratio was:
Obama 349
McCain 162

I enjoyed both speeches. McCain's speech was characterized by humility and selflessness and I was impressed by the way he delivered it. The full text an video is included in the previous post.

Obama's speech oozed the same collectedness and quietude many saw in him during the past 21 months of intense campaigning.

As most pundits have argued time and time again, this is historic.

"If there is anyone out there who still doubts that America is a place where all things are possible; who still wonders if the dream of our founders is alive in our time; who still questions the power of our democracy, tonight is your answer.

It's the answer told by lines that stretched around schools and churches in numbers this nation has never seen; by people who waited three hours and four hours, many for the very first time in their lives, because they believed that this time must be different; that their voice could be that difference.

It's the answer spoken by young and old, rich and poor, Democrat and Republican, black, white, Latino, Asian, Native American, gay, straight, disabled and not disabled - Americans who sent a message to the world that we have never been a collection of Red States and Blue States: we are, and always will be, the United States of America."

The full text is here:

The full video is here:

What times these are!
It was a great night for us here.
Ohio, Ohio.

Right, he captured the imagination of the young and, as the morning programing seems to be saying, and the college-educated, among other demographics.
What an impressive outcome!

Congrats, pres-elect!
I also just heard that Obama won this election in the suburbs among college-educated whites.
Hm!

45 years after Martin Luther King. This is historic.

Right. I agree. Technology use is a great help.

This election had meaning for all of us around the world. As the European director Lars von Trier has pointed out, one does not have to live in America to be American-minded. This great country means so much to so many around the world.
Good going, America!

I don't think even just 10 years ago I would have believed we would be electing a black man to this country's highest office so soon after the Civil Rights era. This is truly significant, and I'm very proud of my fellow Americans.

Still so much progress to make, but this is definitely a step in the right direction.

Here's to new hope. One of the reasons I find this to be so unique is that it has gotten so many people interested and involved. It's a great thing to see democracy at work.

It was a very well-run campaign. The message of this story seemed to have been, you work hard, you do your best, you take the high road: you win.

And I do prefer to have leaders who espouse an all-inclusive rhetoric. Obama's speech have proven most effective and I do think it's because of his all-inclusive tone. So much good work can be accomplished when people work together, no doubt.