A Nobel Laureate's Words of Wisdom 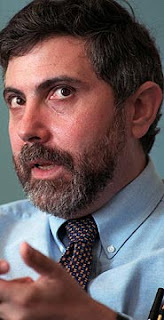 Tip of the hat to Vipul for the pointer.

Paul Krugman was awarded the Nobel prize for Economics. Business.timesonline writes:
"An American academic was named as winner of the Nobel Prize for Economics today only hours after publishing a column in The New York Times suggesting that Gordon Brown may have singlehandedly saved the world financial system.

Paul Krugman, a professor at Princeton University and columnist for the NYT, won the award for his analysis of international trade and economic geography. He is equally well known for his frequent columns in the newspaper analysing the global financial crisis."

Krugman has a specific way in which he operates. His basic rules for research are:

1. Listen to the Gentiles

What I mean by this rule is "Pay attention to what intelligent people are saying, even if they do not have your customs or speak your analytical language."

He opens his excellent narrative with the following:

"My formal charge in this essay is to talk about my "life philosophy". Let me make it clear at the outset that I have no intention of following instructions, since I don't know anything special about life in general. I believe it was Schumpeter who claimed to be not only the best economist, but also the best horseman and the best lover in his native Austria. I don't ride horses, and have few illusions on other scores. (I am, however, a pretty good cook)."

A most excellent piece. Read it all here.
graph per business.timesonline
Posted by B.R. at 1:57 PM

If I was in the habit of saying 'amen' it would be to this:
"Pay attention to what intelligent people are saying, even if they do not have your customs or speak your analytical language."

Quite a thought to hear a Nobel laureate say he doesn't necessarily have a "life philosophy" when all of these non-Nobel-having celebs have the courage to 'publish' their two cents about life. People like Krugman should be the ones who gets primary attention from all of us. Who knows we, as a collective, might end up learning something. Oh! Perish the thought that should happen!!!
By the way, did you catch him on Real Time a couple of weeks ago?
good post.