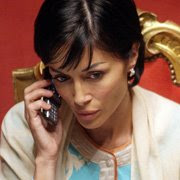 Ah, Italy!
The land of Dante.
The land of Manzoni.
And, the land of Berlusconi.
Spiegel.de via the Italian newspaper, La Reppublica informs us today that Italy's premier, 72-year-old Silvio Berlusconi's at it again. When talking with extreme enthusiasm about one of his youngest cabinet members, former Miss Italia contestant, Mara Carfagna, Berlusconi apparently observed: "If I weren't already married, I'd marry her right this instant!"
Those of you who read German will find this Spiegel bit quite interesting. Berlusconi's words with regards to Carfanga were: ""Wenn ich nicht schon verheiratet wäre, würde ich sie sofort heiraten.""
Nice going!
Right after he made this public praise, his wife, Veronica, turned to the papers and said that she felt deeply hurt. Incidentally, this is not the first time that Berlusconi has gotten in trouble with the Mrs. A similar instance happened two years prior when he publicly told a reporter: ""With you, I'd go anywhere"."
Spiegel notes: "Seine Frau Veronica fand das gar nicht witzig und veröffentlichte ein paar Tage später einen Brief in "La Repubblica", in dem sie die Äußerung ihres Mannes als Verletzung ihrer Würde verurteilte."

Yes, no other medium can settle a domestic dispute the way the press can. Way to go!
Berlusconi, that beacon of enlightenment and symbol of collected wisdom, gets the prize of the week as the most politically correct and not gender-biased politician of the West, perhaps?
My diagnosis of the billionaire: Signor Berlusconi, you're suffering from a case of open mouth insert foot! Times a few times.
Berlusconi, quite democratically, wrote back to his wife on the newspaper - don't these people have a kitchen table where they can talk things over?! - that he talks a lot but does nothing. Then he had the proverbial nerve to self-compare to none other than John F. Kennedy. He says - my translation - 'Dear Veronica, I talk a lot but I don't do anything. Jackie Kennedy wrote a letter once to the Washington Post when her own husband was busy in other beds. Your husband, who is always in love with you, Silvio."
Right. Scusi?
If you read Italian, here is the full article.
graph per spiegel
Posted by B.R. at 11:23 AM

Why, he'd made Gloria Steinem proud!

but seriously, how is this even newsworthy? i understand that he's the idiot who said stupid stuff openly to the press, but still. why do people feel the need to be involved in the personal lives of others outside their group of close friends and family?

Wow. So, what, the Miss contestants who don't get crowned turn to politics?
Oh, and I see the Spiegel article says that she's written a book about other conservative women, Palin, a fellow beauty contestant, being one of them.

A severe case of insert foot in mouth, indeed! I'm afraid I wouldn't be able to stand for such vagrant disrespect if I were her. But I wouldn't run to the papers, just out the door.

I read the full Spiegel piece and, Carfagna, sounds like a major piece of work. Did she actually say that it's not written anywhere that every woman should agree with the women's movement? Or did I just misread that. Somehow I think that's what she said.
Why are some women afraid to be FOR women's rights? This past bizzare: it's absurd!

And what did the politician beauty queen have to say about that?

Yowsah!
I feel badly for what Bill Clinton had to go through back when he was pres. If he had publicly and on record told some reporter lady that he'd marry if it were for Hillary, yeah, I don't think that would have jived all that well.

What's up with Miss contestants who act so not pro-Women Rights, yet they go for public office?
I have to say, I don't understand....

What a clown this guy is! How can misogyny like that be trumpeted in the media? So embarrassing for the country, I'd say.

Ah, the Italy days.... It is definitely a different story out there. Gender roles are differently played out there. As least, acc. to me.