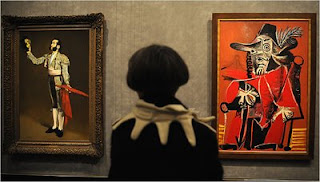 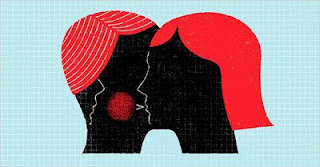 New studies on marital relationships suggest:
"surprising changes in the marital landscape. Infidelity appears to be on the rise, particularly among older men and young couples. Notably, women appear to be closing the adultery gap: younger women appear to be cheating on their spouses nearly as often as men."
Read more here.

And the new Paris-based exhibit, Picasso and the Masters, is something I would love to see. I don't always have an active appreciation for Picasso but, for some reason, I'm finding myself more and more enamored of his style. A line from the most recent article on the new exhibit observes, "Picasso, in such straitened times, remains at least a reliable brand for exhibition organizers, who especially seem to love these compare-and-contrast affairs because they guarantee boffo box office."
...and...
"Let it first be said that Picasso, having taken on history as if fated to do so from childhood, embraced such extravagant comparisons — which isn’t to say he survives the competition altogether intact. “Art is not the application of a canon of beauty,” he once said, “but what instinct and the brain imagine quite apart from the canon.”

The canon, in other words, remained his starting point but increasingly became his crutch. His achievements were Promethean and unparalleled in the last century, but having said that, as the show proves almost despite itself, Picasso ended up often mired in vain, backward-looking riffs on grander achievements. "
Read more here.
graphs per ny times
Posted by B.R. at 9:48 AM

The infidelity results seem to be based on a pretty solid heteronormative scale. Is it supposed to shed light on sex differences or is it just a gender commentary?

I think the younger generation has been raised to be more flippant about commitment than previous generations.

Picasso's work does make one reminisce of certain time frames in history, hence its relevance.
As for the study, I've always believes that people, male or female, are bogged down by the same dilemmas. What's gender got to do with it?

Does the study provide any reasons why there are such high numbers of infidelity?