Handsome Teacher in China and Incentives? 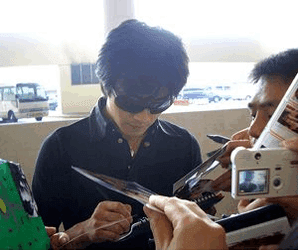 Tip of the hat to MR for the pointer.
This could be classified under many things. I'm opting for 'aesthetic differences' for now.
Incidentally, the fellow featured here is the person about whom the piece is written.

"A handsome teacher in China is offering pupils autographed photos of himself to encourage them to work harder.

Ji Feng, also vice principal of Zhiyuan Foreign Language Elementary School, is so popular among students that a lot of them were asking him for pictures.

"I came up with the idea of giving them my signed pictures as a reward," he told the Nanjing Morning Post.

Students who put in exemplary work can now pose for a picture with Ji who then signs the printed photograph.

Ji added: "It absolutely is not narcissism, but a way of encouragement. And only the students who perform the best can get such a reward."

Ji said three students had so far submitted work good enough for signed pictures - but he hoped to give out many more."
per ananova
graph per slashdot
Posted by B.R. at 5:01 PM

Labels: China, Fact of the Day

Oh vanity, 'this guy' is thy name!
How bizarre, how bizarre.

I like how resolutely he says:
"It absolutely is not narcissism, but a way of encouragement. And only the students who perform the best can get such a reward."

Right. It's a reward, indeed. What's the word for 'obtuse optimism?'

Wait, what?!
Who elected this guy to be a beacon of aesthetic superiority?!

No, Nicks, but thanks. Just corrected the misspelling. I suppose bias comes out on a whim, at times.

I suppose most people read their blogs at the end of the day, hence the 'cornucopia' of comments here.
This, though, is holy-cow weird!!
This gives narcissism a whole new meaning.