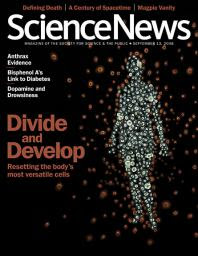 Science News reports:
"The study, to appear in the Proceedings of the National Academy of Sciences, is the first to try to examine whether a hormone that encourages monogamy in animals plays a similar role in male humans. Before getting ideas about a DNA-fidelity test, though, women should consider that the study wasn’t designed to determine how much — or even whether — the gene in question is responsible for monogamy in humans.

“We can’t with any accuracy predict effects on behavior,” says Hasse Walum of the Karolinska Institute in Stockholm. “A lot of different things determine how happy you will be in a relationship.”

And just as I was thinking that a gene alone cannot be responsible for all the intricate layers of a relationship and the commitment that goes into it, I got to the end of the article which states:

"Marital harmony is determined by the behavior of two complex individuals, of which genes play only a part.

“It will be labeling a lot of people in a way that will be absolutely wrong,” Young says. “There’s so much more that goes into the quality of a relationship than a single gene.”

Interesting read. Find it all here.

Hm. Something I noticed is that the focus was mostly on men. Women deal with commitment-phobia as well. A truly gender-egalitarian argument would include both camps equally, no?

Hm. Something I noticed is that the focus was mostly on men. Women deal with commitment-phobia as well. A truly gender-egalitarian argument would include both camps equally, no?

Maybe some men have a different idea of what constitutes commitment. Just today I was discussing commitment with a male friend of mine. He thinks it's possible to be in a committed relationship with someone while still keeping options open, and still being able to put prospective lovers on a proverbial backburner in case things in said committed relationship go awry. I think if you're looking and considering other partners at all you're not actually committed to your current partner.

The predisposition of some people to behave a certain way has got to be genetic, I'd think.

A gendered take on this would be, how come so much research is mostly about men? I mean, there's the pharmaceutical research first and then all of these other medical studies that are giving us extra info about men behaving a certain way... Where are the women....?