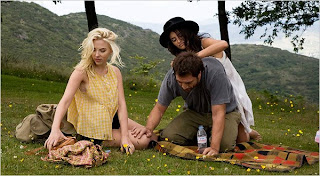 As most Woody Allen's movies have it, 'life's short and dull, so, yeah, good luck with all that....'
The premise of Allen's new film Vicky Christina Barcelona is definitely interesting. It was what made us watch it opening day, after all.
In a nutshell, I was glad it was an hour and a half but I did enjoy much of the 90 minutes. Unlike Woody Allen's Match Point or Scoop, this new film seemed to have relied more on the abilities of its key performers.
Who really carries this film is Javier Bardem and that is the main reason to go watch it.
Well, that and the breathtaking views of one of the most spectacular European cities, Barcelona.
Scarlett Johansson's presence is bearable especially when she shares scenes with Bardem and Penelope Cruz. I reckon, the latter two could make most actors look good.
So, is Vicky Christina Barcelona worth a look? Yes, it is. And like a good guest, it knows when to bounce.
graph per imdb
Posted by B.R. at 10:56 PM

I like Javier! Does he pull off 'comedy' for real?

do cruz and bardem speak in english?