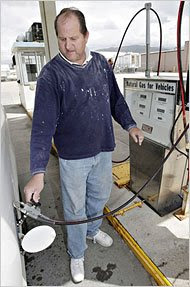 Just read this on the Times. Salt Lake City is one of my favorite spots so, naturally, I was interested in the subject.

"The best deal on fuel in the country right now might be here in Utah, where people are waiting in lines to pay the equivalent of 87 cents a gallon. Demand is so strong at rush hour that fuel runs low, and some days people can pump only half a tank.

It is not gasoline they are buying for their cars, but natural gas.

By an odd confluence of public policy and private initiative, Utah has become the first state in the country to experience broad consumer interest in the idea of running cars on clean natural gas."
graph per ny times
Posted by B.R. at 10:09 AM

Might have something to do with the fact that right now our gasoline prices are the highest in the contiguous 48. Thank god for bicycles!