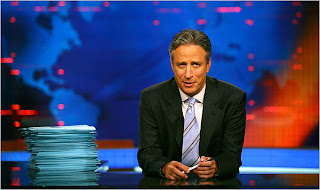 Those of you who watch The Daily Show might enjoy this. A bit from the article features Stephen Colbert's comments, among other things.
" “Jon’s ability to consume and process information is invaluable,” said Mr. Colbert. He added that Mr. Stewart is “such a clear thinker” that he’s able to take “all these data points of spin and transparent falsehoods dished out in the form of political discourse” and “fish from that what is the true meaning, what are red herrings, false leads,” even as he performs the ambidextrous feat of “making jokes about it” at the same time.

“We often discuss satire — the sort of thing he does and to a certain extent I do — as distillery,” Mr. Colbert continued. “You have an enormous amount of material, and you have to distill it to a syrup by the end of the day. So much of it is a hewing process, chipping away at things that aren’t the point or aren’t the story or aren’t the intention. Really it’s that last couple of drops you’re distilling that makes all the difference. It isn’t that hard to get a ton of corn into a gallon of sour mash, but to get that gallon of sour mash down to that one shot of pure whiskey takes patience” as well as “discipline and focus.”"
graph per ny times
Posted by B.R. at 12:47 PM

it's what i watch when i want to know what's happening in the world. plus, you get a good laugh out of it. beat that, Wolf Blitzer!