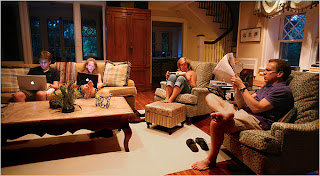 Today's NY Times features an article on online reading and how it relates to the literacy debate.
Not till a few years ago the most common sight in random coffeeshops across the country was people reading books or the paper while sipping their java. Now, people typing away on their notebooks, while hooked to their iPods in their self-created technology islands, are as ubiquitous as Miley Cyrus fans camping out on city streets days before her concerts.
Some questions that beg to be asked are, 'Well, are people reading enough now that most of their visual time seems to be spent online?' 'Are books being checked out from local libraries or are comments written on Myspace and Facebook profiles deemed more relevant?'
Today's article addresses these very questions. A bit says:

"Some traditionalists warn that digital reading is the intellectual equivalent of empty calories. Often, they argue, writers on the Internet employ a cryptic argot that vexes teachers and parents. Zigzagging through a cornucopia of words, pictures, video and sounds, they say, distracts more than strengthens readers. And many youths spend most of their time on the Internet playing games or sending instant messages, activities that involve minimal reading at best.

Last fall the National Endowment for the Arts issued a sobering report linking flat or declining national reading test scores among teenagers with the slump in the proportion of adolescents who said they read for fun.

According to Department of Education data cited in the report, just over a fifth of 17-year-olds said they read almost every day for fun in 2004, down from nearly a third in 1984. Nineteen percent of 17-year-olds said they never or hardly ever read for fun in 2004, up from 9 percent in 1984. (It was unclear whether they thought of what they did on the Internet as “reading.”)"
Read more here.
graph per ny times
P.S. And while I'm at it, I just noticed something genderable about this NY Times pictures. The boy is on a MacPro, or as it known among some bona fide Apple fans: 'the serious model' whereas the girl is typing away on her fragile (but oh-so-fun) black MacBook. Hm.
Posted by B.R. at 11:04 AM

Interesting. I know for a fact I've been reading fewer books since I got a laptop and started taking it with me when going out. I miss the quiet days of reading in the sun. I'm heading to the library.....

For real, what's with the Apple choices?!

I actually think I read more because of the internet. I became seriously interested in reading for fun as a teenager by reading amateur fiction on the internet. Today I read about 20 blogs per day, along with about 10 advice columns (cause I have some weird fetish for them), and I'm usually working my way through about 3-6 actual physical books at a time.

I think I used to read more when I was younger, though..... The article seems to say that the demographic that has the hardest time reading for longer periods of time is the young people.