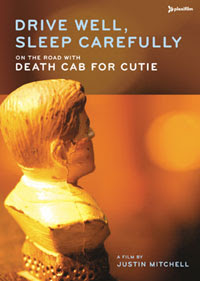 I often make references to the music of Death Cab for Cutie and Postal Service. I don't just happen to like their music. I find them uniquely relevant as well.
Hence, I welcomed the opportunity to see Justin Mitchell's Death Cab for Cutie tour documentary Drive Well, Sleep Carefully: On the Road With Death Cab for Cutie. Mitchell followed the band around during their summer 2004 U.S. tour.
The band members provide wonderful commentary regarding their music and their travel experience while touring. Many contemporary pop culture references are made throughout the documentary that, in my opinion, most indie rock fans will find informative and humorous at the same time.
Three things sold the film to me. First, a commentary on their oh-so-gripping song "Tiny Vessesl," second, the impact that the film Mulholland Drive, another favorite of mine, had on band, and third, how comfortably these artists share their vulnerabilities.
So, I recommend this film fully.

Here is a list of the Live Performances in the film:

dcfc rule! the new stuff is great too....

i've seen shows at some of those venues, but i've never played them... :(