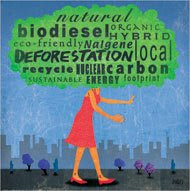 This is a really good piece on thinking and being Green. It also tackles a most relevant topic called Green Fatigue. Let's face it, after Gore's An Inconvenient Truth, much Green-inspired discourse has been generated and, while I find much of it very useful and helpful, some can be a tad much. I try to live as green as I can. For example, today I'm wearing my 100% organic cotton 'Go Green' t-shirt.
Right.
Well, I also drive only when I absolutely have to. My people would say, 'thank goodness for that!' since I used to tend to speed a bit. But that tendency has long been attended to, naturally. And I bike everywhere. Let's see what else, I also tend to wash my dishes by hand. And I tend to put the groceries in washable cotton bags.
I do think that we can all make a difference by being more mindful of resources and being more gentle to our planet. At the same time, I also think that we tend to behave better when not constantly told what to do and how to do the things we are supposed to do.
Hence, I found the following the paragraph from the article particularly interesting:
'Eddie Stern, 38, a media strategist in Durango, Colo., said he recently “went nuts, just trying to buy a car” because of the “overload of info, from the news, from the Internet, from quote-unquote experts on the street.”

Every new tidbit of research seemed to contradict the last. Some environmentalists made the case for a new hybrid, others insisted that buying a used model with a standard engine would save the huge amounts of energy that go into manufacturing a new vehicle. Other environmentalists supported biodiesel, on the grounds that it means, essentially, growing gas. Others countered that biodiesel still pollutes.

Mr. Stern said he finally settled (after a coin flip) on what seemed like the ideal compromise, a used Ford Escape hybrid. Ideal, until his brother, who works in the solar-power industry, asked, “Where are you going to bury the battery?”'
But jokes aside, the NY Times' piece is particularly sound and relevant. I enjoyed.
graph per ny times
Posted by B.R. at 5:50 PM

as it says in the article, sometimes it's just to much information. While it's great to be informed, it's also greater to have some faith in the consumer.

Where did you get the shirt?
I want to be more green to. Might as well start with my wardrobe. :=)

what do you make of the high prices you need to pay for 'organic' clothing now.....?

totally right. sometimes it is too much information. I think when making such decisions it boils down to what is important to you and how important it is to you