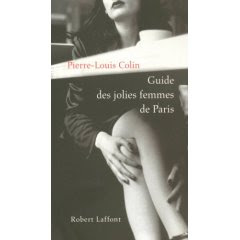 Would one be out of line if one called this book a tad sexist?
Ok, so, here is the premise.
It's a guide to the beautiful women of Paris and where one might meet them.
I'm really not joking. This is what the book is all about. And the author, a thirty-something man stands by his thesis with firmness.

Check out the following bits from AFP's review.

'Paris is the most visited capital in the world and people come here to see city's magnificent women as much as they come to admire the Mona Lisa and the Eiffel Tower, Pierre-Louis Colin told AFP.
...
He rejected suggestions that an alternative title for his oeuvre might have been the "Voyeur's Guide to the Pretty Women of Paris" -- though concedes his girlfriend was at first perturbed by the idea of his book, but later came to like it.'

Ok, after reading it, my first reaction was 'oh?' The second was 'oh!'
If one's running out of things to text to friends, one should pick up a copy of this book. Some of you might find it preposterously objectifying and sexist, some a light read to take on a plane. If nothing else, it'll generate a healthy number of SMS threads. At least, I'm finding it so.
graph per amazon
Posted by B.R. at 11:48 AM

Just when you think all the kitsch titles have already been taken, there's always a new one around the corner.

It could make a good b-day present for certain people.

Why do you think, some French women, are oh-so-ok with this?
Should I not be as bothered by the book as I seem to be....?

Ah, the French, the French. Somehow the book makes sense in that market, though. They truly have fantastic women! Well, fantastically dressed women, at least.....
I don't know if I was sexist just now :)

this honestly sounds interesting. i may have to read it on the plane next month.