The French Obsession with Sarkozy: A Bona Five Love Story 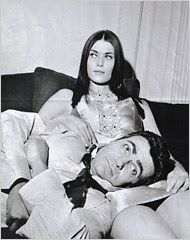 I'm fascinated by France's Sarkozy and I'm not even a French person.
Many French people are so obsessed with their leader that they're now taking many of their respective obsessions, fantasies, and issues to their therapists' office.
I'm really not joking.
The Times' piece observes:
“As I listened to my patients during consultations, many of them mentioned Sarkozy by name,” Dr. Hefez said. “He’s penetrated some of their deepest fantasies. I noticed all this passion in people speaking of him, and I thought there is something particular about this man — he’s like a reflection of us in the mirror.”
The French project themselves onto Mr. Sarkozy, too, Dr. Hefez said.
“He’s the incarnation of the postmodern man, obsessed with himself, turned toward pleasure, autonomous and narcissistic,” the psychiatrist said. “And he exhibits his joys and sorrows, all his private life, his sentimental doubts and pleasures. He represents the individualism of the society to the extreme, that it’s the individual who counts, not the society.”

Well, especially the last paragraph made me produce a loud, 'holy cow!' when I read it. Could it be basic cynicism or is there actually some measure of truth to this? Granted, there is individualism galore out there but I find it difficult to believe that it is the sole active currency. I've found Sarkozy fascinating from the very beginning. I don't know what it is, really, other than this inherent ability to fuse confidence with inferiority.
Apparently, the French are reading papers obsessively following their leader's private and public life as closely as possible. Many papers are being sold and many discussions are being generated. Oh, yes, and more shrinks are being seen too. Here's how a session starts in my mind:
'So, what would you like to talk about today?'
'I had a dream that I was dating Carla Bruni,' says the hypothetical French patient.
I don't know if the Sarkozy phenomenon is a a commentary on contemporary individualism or a simple example of people being fascinated by foibled and fallible leading figures. Hmm. I especially like how the Times article concludes:
'The Rue89 news Web site asked: “After a year of dependency, how can we stop being Sarkotoxicated?”
As yet, there appears to be no cure.'
graph per ny times
Posted by B.R. at 8:43 PM

Sarkozy.... Yeah, what a 'text'!
I especially like it when he sports his bling-bling. Too interesting a thing.

it's quite funny that he gets as much press in france as the so-called celebrities in the us.

This is way too strange. And spooky. Why identify so much with someone? Hmm.

I very much miss the days when narcissism was kept under wraps and not flashed on the Nightly News. Dude!

I guess what makes him a symbol is the fact that he enjoys public attention and does not mind showing his personal life to the rest of the world. Well, actually, he seems to rejoice in it. Hm. Don't many others do this too, though? I don't know why it's such a big deal. If he enjoys this kind of attention, let him have it.

Could this be true, "“He’s the incarnation of the postmodern man, obsessed with himself, turned toward pleasure, autonomous and narcissistic"...?
So, postmodern man is, in nuce, narcissistic?
Hmm. Don't know how I feel about this.